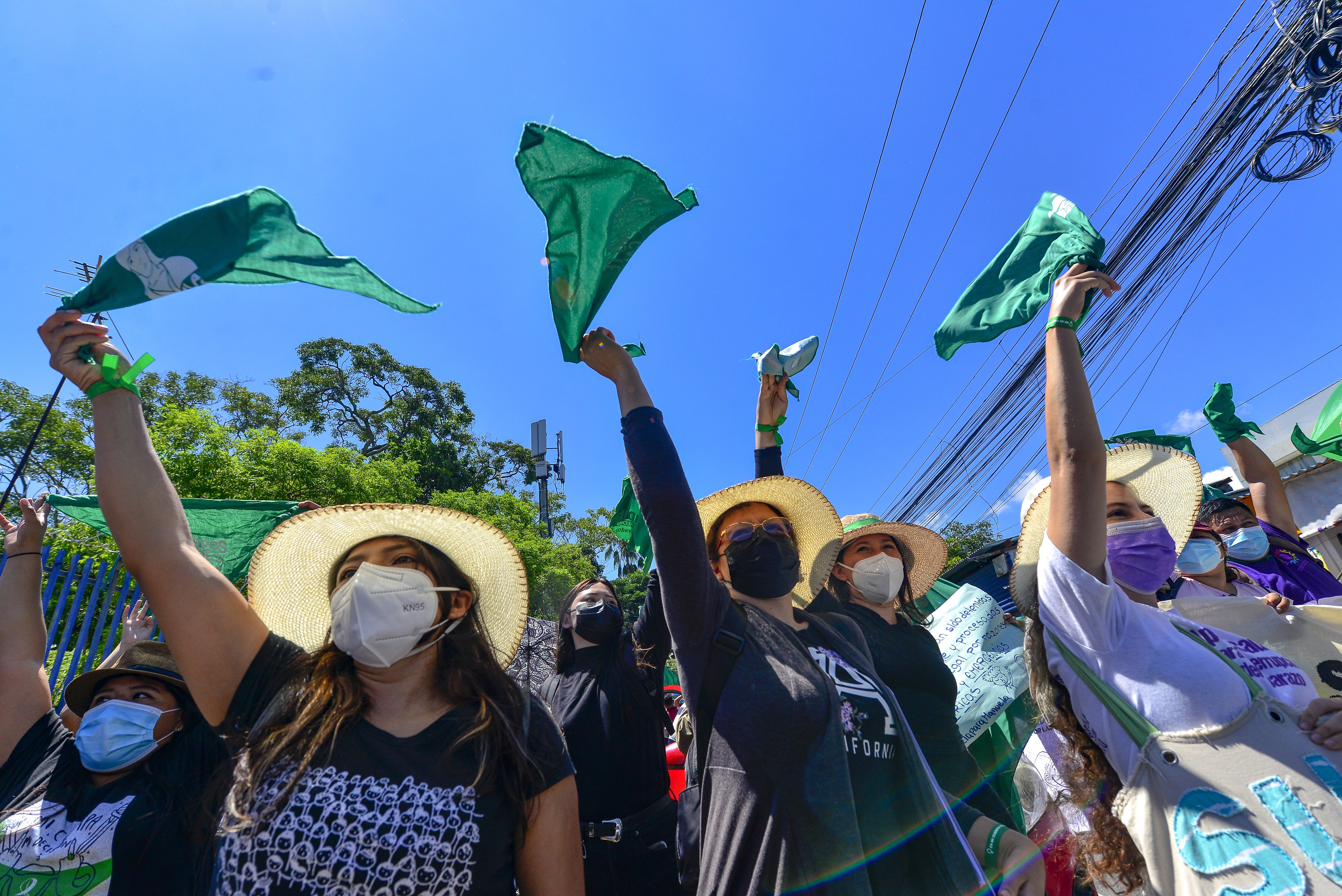 As the U.S. braces for the possible rollback of abortion rights later this year, seismic shifts are happening south of the border. A series of recent legal and legislative decisions has begun to loosen restrictions in Latin America, a region with some of the world’s harshest antiabortion laws. And they could chart a path toward reform for governments that still advocate for the procedure to remain illegal. The health and economic consequences of keeping longtime bans in place may provide cautionary lessons for the U.S. as a Supreme Court decision to scrap Roe v. Wade appears to be imminent.

El Salvador has stood out for its aggressive pursuit of pregnant people who seek an abortion or have a miscarriage. Since 1998 the country has upheld a total ban on abortion, even in cases of rape, incest and high-risk pregnancy. As a result, about 181 women were prosecuted between 2000 and 2019 for getting an abortion or suffering an obstetric emergency, according to data compiled by a human rights group.

A woman known only as Manuela was one of them. In 2008 she had a miscarriage and went to a hospital to be treated for serious blood loss and preeclampsia. Her physician suspected that Manuela had taken steps to willfully terminate her pregnancy and called the police. Manuela said she lost the fetus after falling into a river while washing clothes. But she was almost immediately detained. A few months later, she was sentenced to 30 years in prison for “aggravated homicide.” She died in 2010, after receiving erratic treatment for Hodgkin’s lymphoma.

On November 30 the Inter-American Court of Human Rights ruled that El Salvador violated Manuela’s rights and was responsible for her death. The court ordered the government to provide compensation to Manuela’s family and to create a number of protocols, including one that protects patient-doctor confidentiality. Morena Herrera, head of the Citizen Group for the Decriminalization of Abortion in El Salvador, says the decision is unprecedented in the region and could spark much needed changes. “It won’t be automatic, I think, but recognizing that the total ban [of abortion] causes such injustices is an important step,” she says. “It erodes the crime that some conservative sectors are so keen on.”

The pressure on the government of El Salvador has continued following the decision of the human rights court. Three women imprisoned for obstetric complications, such as a miscarriage, were released by the government on December 23—that brings the number freed since 2009 to 60 women, a direct result of activism by human rights groups.

The court’s ruling may contribute to a larger but by no means monolithic trend in which Latin America has started to decriminalize abortion. This regional shift comes just as the U.S. Supreme Court signals that it may be ready to end Roe v. Wade, the 1973 case that guarantees a constitutional right to the procedure.

Should that decision be overturned, at least 26 states are poised to immediately ban or acutely curtail access to abortions, according to an analysis by the Guttmacher Institute, a New York City and Washington, D.C.–based research group that supports abortion rights. “A post-Roe U.S. is one with dramatically expanded inequalities in abortion access,” says Caitlin Knowles Myers, an economist at Middlebury College. “The result will be that about 40 percent of U.S. women who reside in a broad swath of the South and Midwest will experience the closures of nearby abortion providers.”

To understand what reduced access to abortion in a post-Roe future could mean, some experts suggest looking at the past experiences of Latin America—and its current evolution toward an easing of bans. Many countries in the region have used abortion restrictions as a way to undermine the agency that women and others, such as transgender men and nonbinary people, retain over their body, says Mariana Romero, a researcher on reproductive health who leads the Center for the Study of State and Society in Buenos Aires. “What those laws seek is control,” Romero says. “And [shaping] the perception of this autonomy [to abort] as a selfish, deviant act.”

The legal status of abortion throughout Latin America confirms her view. Until recently, only a handful of smaller nations—Cuba, Guyana and Uruguay—had decriminalized abortion. A Guttmacher report showed that more than 97 percent of women in the region lived in countries with some kind of restriction in 2017. And it found that about 760,000 of them were treated for complications from unsafe abortion each year—although the use of self-managed medication, such as misoprostol, has increased the safety of clandestine procedures.

Decades of prohibition have “allowed us to see the most terrible consequences of the disproportionate and arbitrary application of criminal law” in regard to abortion, says Carmen Martínez López, regional manager for Latin America and the Caribbean at the Center for Reproductive Rights, a legal advocacy organization based in New York City.

But the situation is in flux. In the past year alone, Argentina became the largest country in Latin America to legalize abortion for any pregnant person who requests the procedure within 14 weeks of gestation—the culmination of a years-long movement to expand abortion rights in the country. And last year the Mexican supreme court ruled that imposing criminal penalties for those who seek an abortion is unconstitutional. Chile, which had an outright ban on abortions until 2017, debated a bill to ease restrictions on the procedure. And Colombians now await a potential ruling to eliminate barriers to legal abortion and end the prosecution of people who have had an abortion. The debate over abortion intensified during the Zika outbreaks in the Americas during 2015 and 2016.

Romero was lead author of a six-country study, ranging from Argentina to El Salvador, that revealed just how disparate access still is—and how abortion persists as a major public health issue. After surveying nearly 8,000 women, her results show that nearly 50 percent of them experienced moderate complications related to pregnancy and more than 46 percent had mild ones. The rest had poor outcomes, including more than 3 percent who faced potentially life-threatening consequences and 0.2 percent who died. The study noted that restrictive policies, as well as the stigma surrounding abortion, may make the procedure unsafe.

Abortion-related complications can fall rapidly when policies are eased. In 2007, when Mexico City legalized abortion for the first trimester of pregnancy, women’s health improved dramatically. There was an immediate drop in hospitalizations because of blood loss, a complication that is common following an unsafe abortion. “The magnitude of the effect is so big,” says Damian Clarke, a health economist at the University of Chile, who co-authored the research. “There have been very few public health implementations where you just see that it cuts morbidity in half with just one law change.”

The benefits of legalizing abortion are not only health-related. In a 2021 analysis Yana van der Meulen Rodgers, a health economist at Rutgers University, and her colleagues read through hundreds of studies that evaluated how abortion care and policies impact economies across the world, including Latin America. “Overall, we found extensive financial costs to individual women, as well as to national governments, when there are restrictive abortion laws,” Rodgers says. Women, she discovered, faced higher medical costs because they tended to delay abortions and seek unsafe procedures. In Latin America, medical assistance following an unsafe abortion made up more than half of countries’ budgets for obstetric care.

For Clarke, the extent of the evidence holds a message for the U.S. “At the moment, as precarious as it is, abortion is available,” he says. “If this gets taken away, then we should expect a really big spike in [abortion-related] complications.”

A nascent movement has begun in activist groups in Mexico to help U.S. women gain access to abortion pills. Several organizations are meeting in January to sketch a plan to distribute abortion-inducing medication in Texas, which enacted a new ban on the procedure in September. The goal is to create “a cross-border network of support for safe abortion for Texan women,” says Verónica Cruz, director of the Guanajuato-based feminist organization Las Libres, which is leading the initiative. Should Roe v Wade be reversed, the idea is to expand this support network to other states, she adds.

Roe’s potential demise could also have a spillover effect in countries where there is a tradition of harshly criminalizing abortion. Previous U.S. legislation had a similar effect. In 1984 the nation enacted the so-called global gag rule. In effect, the policy, which has been rescinded and reinstated multiple times, prohibits foreign organizations that receive U.S. funds from providing abortion counseling or advocating for decriminalization of the procedure or expansion abortion services.

In a 2018 book on the gag rule, Rodgers looked at data from more than 50 countries and found that when the U.S. restricted financial assistance to them based on whether or not they provided abortion services or referrals, abortion rates climbed in Latin America and the Caribbean, as well as in sub-Saharan Africa. “There was less financial assistance for reproductive health services, so clinics closed or had reduced staffing. They had fewer supplies,” Rodgers says. This resulted in less access to contraception, more unplanned pregnancies and more abortions, many of which were unsafe because of restrictive laws.

It is unclear yet whether Roe’s reversal would again cause such dramatic disruptions. But the decision would likely bolster the ideological stance of regional Latin American conservative movements and influence legislative changes. “One cannot be naive,” Martínez López says, “even if one is optimistic.”