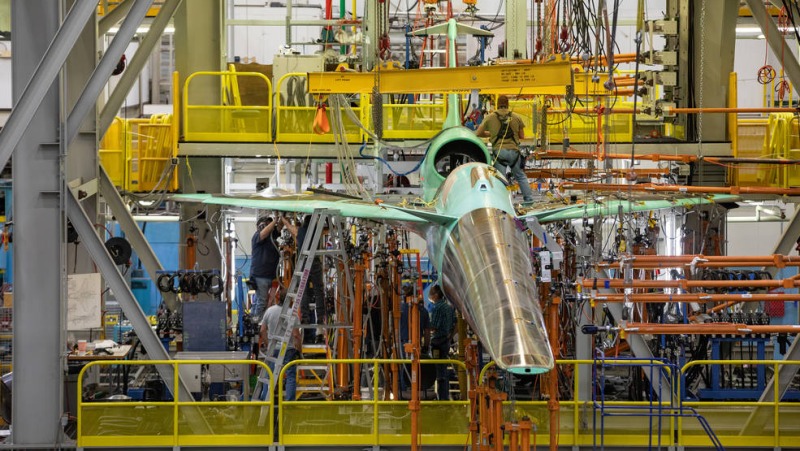 A quiet supersonic plane designed and built by NASA to usher in a new era of superfast air travel made a pitstop in Texas to perform crucial structural testing ahead of a debut flight later this year.

NASA’s X-59 made the switch between Lockheed Martin facilities in late December, moving the plane between Palmdale, California and Fort Worth, Texas to take advantage of specialized equipment available in the Lone Star State to make sure the speedy vehicle won’t face too much stress in mid-air.

“It would have been expensive and time consuming to design and build them from scratch in Palmdale,” Mike Buonanno, a Lockheed Martin aerospace engineer who is the vehicle lead for the X-59, said in a NASA statement Feb. 11.

“In Fort Worth, they’ve got the perfect facility with a full control room and all the support equipment needed to do those tests very efficiently,” Buonanno added. While the test equipment was made for the shorter-nosed F-16, modifications proceeded swiftly and now the X-59 supersonic plane is being assessed in three different metrics.

Supersonic planes are fast movers in the air, but the price is noise and vibrations. Sonic booms occur as the plane exceeds the speed of sound, producing considerable noise and at worst, causing glass shattering and other damage to buildings underneath.

For example, the supersonic boom produced by the iconic Concorde, which retired in 2003 after providing commercial service for well-heeled passengers for a generation, reached 105 decibels, about as loud as a nearby thunderstrike.

NASA is seeking ways to fly fast without causing this environmental stress. The X-59, NASA has said previously, should be no more noisy than a car door slamming 20 feet (6 meters) away.

But the plane will have to be built to take the load of supersonic flight nonetheless. In Texas, engineers seek to calibrate sensors, to understand stress on the aircraft’s structure during flight, and to compare the results with computer models that predicted the X-59’s performance.

The engineers will need to be particularly careful with the X-59, as it is a single prototype of an expensive system, which was another reason they wanted to take advantage of the facilities in Texas.

“There are all sorts of safety features built into the testing so that if anything we don’t want happening is detected, everything shuts off and the whole thing goes into a safe position,” Walter Silva, a senior research scientist at NASA’s Langley Research Center who is the agency’s structures lead for the X-59, said in the same statement.

The program completed 80% of the structural testing by the last week of January, with everything going well so far, NASA reported. There is no firm timeline to complete the tests, but the program next plans fuel tank calibration, and then an eventual return to Palmdale to install all remaining plane systems and subsystems.

The first flight test is expected in late 2022 in the California high desert.