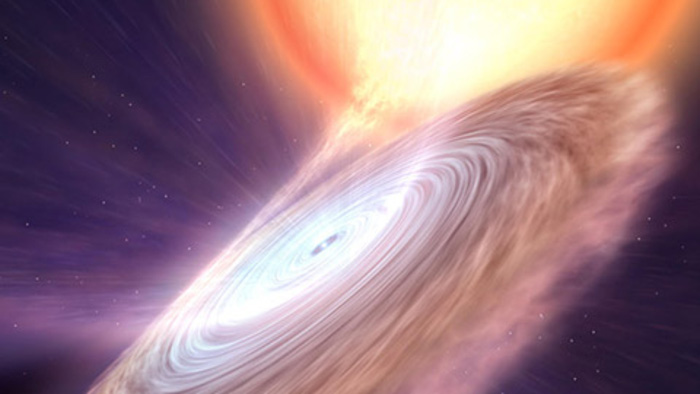 Neutron stars are the remains of more massive stars that reached the end of their lives and exploded in violent supernovas, leaving behind a dense core that continues to collapse in on itself. These stellar corpses are the densest known objects in the universe, aside from black holes, which form when even larger stars die.

In some cases, neutron stars have a stellar companion, from which they accrete matter, forming what is also known as a low-mass X-ray binary system. Scientists have known that neutron stars often spit some of the matter back out into space in the form of winds or jets. Previously, they detected winds that were either very hot or extremely cold— but the new study revealed warm winds are also released.

“Neutron stars have an immensely strong gravitational pull that allows them to gobble up gas from other stars,” Nathalie Degenaar, co-author of the study from the University of Amsterdam, said in a statement. “However, much of the gas that neutron stars pull towards them is not consumed, but flung into space at high speed. This behavior has a large impact both on the neutron star itself, and on its immediate surroundings.”

“Eruptions like this are rare, and each of them is unique,” Noel Castro Segura, an astronomer at  the University of Southampton in the U.K. and lead author of the study, said in the statement. “Normally they are heavily obscured by interstellar dust, which makes observing them really difficult. Swift J1858 was special, because even though it is located on the other side of our galaxy, the obscuration was small enough to allow for a full multiwavelength study.”

Combining data from space and Earth-based telescopes allowed the researchers to study the neutron star across different bands of the electromagnetic spectrum. While observations in ultraviolet wavelengths revealed signatures of the warm winds, the colder winds could be seen at optical wavelengths, the same wavelengths that are detected by the human eye, according to the statement.

“The new insights provided by our results are key to understanding how these objects interact with their environment,” Segura said. “By shedding energy and matter into the galaxy, they contribute to the formation of new generations of stars, and to the evolution of the galaxy itself.”

The study was published March 2 in the journal Nature.