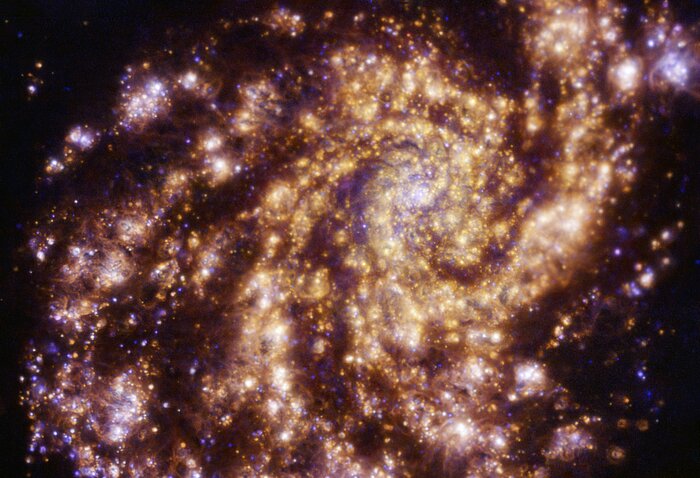 The golden spiral arms of a distant galaxy sparkle in new images from the European Southern Observatory (ESO).

The galaxy, known as NGC 4254 or Messier 99, is an example of a grand design spiral galaxy, which has prominent, well-defined spiral arms that wrap tightly around the galaxy’s center. Located 49 million light-years from Earth in the constellation of Coma Berenices, NGC 4254 houses a stellar nursery shining with clouds of gas ionized by newly born stars, according to a statement from the ESO.

ESO shared the new image, which was captured by the Multi-Unit Spectroscopic Explorer (MUSE) on the observatory’s Very Large Telescope (VLT) in Chile, on March 14. The image showcases the galaxy’s bright spiral arms in “exquisite detail,” according to the statement.

The VLT’s MUSE instrument combines a wide field of view with a fine spatial sampling and a large simultaneous spectral range. The instrument is of a type called an integral field spectrograph (IFS), which allows astronomers to measure the intensity of the light as a function of its color, or wavelength.

Observations of NGC 4254 were collected as part of the Physics at High Angular resolution in Nearby Galaxies (PHANGS) project, which aims to study nearby galaxies across all wavelengths of the electromagnetic spectrum to understand the cycle of star formation in galaxies.