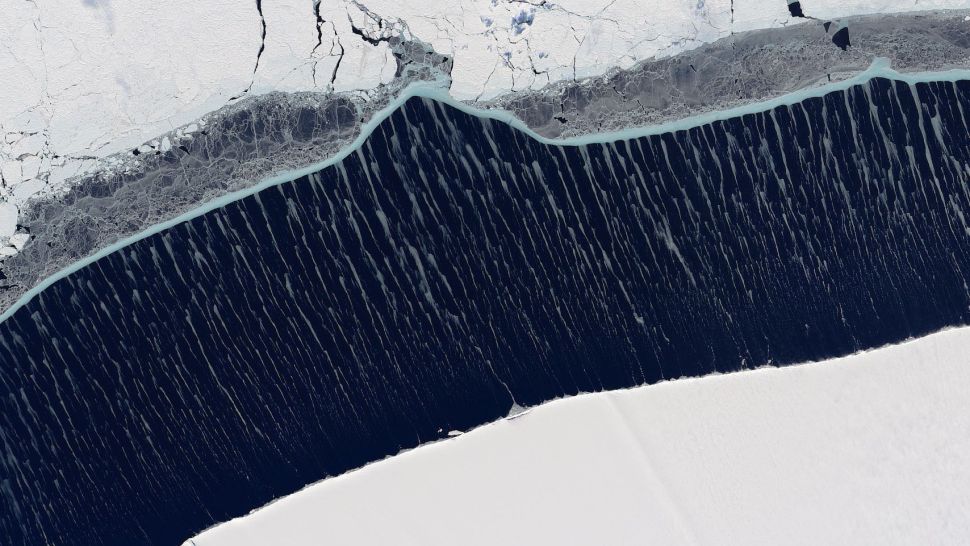 Strong winds and unusual ocean currents helped paint a breathtaking icescape on the surface of the ocean near Antarctica, and the rare phenomenon was recently captured in a stunning satellite image.

The incredible image was taken on Nov. 20 by the Operational Land Imager onboard Landsat 8, a collaboration between NASA and the U.S. Geological Survey, and was released on Dec. 8 by NASA’s Earth Observatory. The picture focuses on a channel of water about 3.7 miles (6 kilometers) across between the Ronne Ice Shelf — a permanent floating extension of the main Antarctic Ice Sheet, which birthed A-76, the world’s largest iceberg, in May — and a large chunk of sea ice in the Weddell Sea.

The sea ice is made up of both multiyear ice (white) that sticks around year after year and first-year ice (gray) that is fresh. This sea ice is normally a lot closer to the Ronne Ice Shelf, but in the image, strong winds have pushed it much farther away. This wider gap has allowed the wispy streaks of ice to form between the two larger chunks of ice. The icy tendrils are made out of nilas, thin sea ice less than 4 inches (10 centimeters) thick. Nilas is made out of frazil ice — tiny, needle-like crystals that are the first stage of sea ice growth — and it normally forms complete fragile sheets that sit on top of the water. However, the strong winds create strange surface currents that prevent the nilas ice from forming into a single sheet and instead push it across the channel’s surface, according to a statement from NASA’s Earth Observatory.

The strong winds have likely induced vortices, or tiny whirlpools, in the layer of water closest to the surface, causing the water to rotate vertically in small, circular patterns perpendicular to the direction of the wind. In areas where these rotations converge, nilas ice has collected, creating the light-gray streaks amid the darker water, Walt Meier, a sea ice scientist at the U.S. National Snow and Ice Data Center, said in the statement.

After being pushed across the channel, the nilas ice can be seen condensing into a thin, blue border around the sea ice. Normally, glaciers and sea ice appear blue only when they become so dense that they absorb the longer wavelengths of light and reflect only the blue. Therefore, it is unusual to see this color in nilas ice, which is very thin.

“I’m not quite sure how the sea ice here gets the blue color,” Meier said in the statement, “but it’s possible the ice got compressed enough to cause that effect.”

This stunning phenomenon could become more common due to climate change. During November, when the picture was taken, the Antarctic sea ice extent — the area of the ocean around Antarctica covered by sea ice — was well below the average for that time of year, according to the statement. Thinner and more fragile sea ice is more susceptible to being moved around by the wind, so this type of ice formation may be more common in the future.