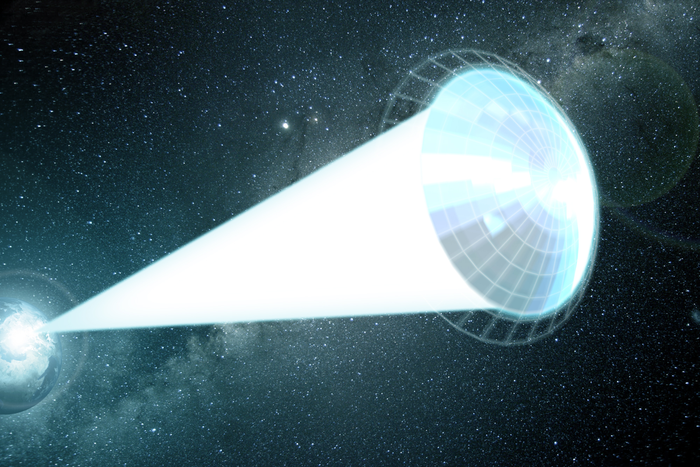 How do you design a sail that can get a spacecraft to another solar system?

NASA’s Voyager 1 and Voyager 2 probes, which launched in the 1970s, remain the only two human-made objects ever to leave our solar system. While the pair have defied expectations and are still operational, researchers continue to devise new missions that could explore beyond our stellar neighborhood. One technology known as a light sail, a sail pushed by light instead of wind, seems to be a promising way to accomplish such an ambitious goal.

Researchers in two new studies explored how best to design a light sail for an interstellar journey. They found that such a sail should billow and have a grid-like pattern and came to some conclusions about the best materials to use as well.

These studies were conducted as part of the Breakthrough Starshot Initiative, a research and engineering project that aims to develop new designs for light sail-powered craft capable of traveling to Alpha Centauri, our closest solar system neighbor.

Breakthrough Starshot is a project with the Breakthrough Initiatives, which are “a suite of space science programs investigating the fundamental questions of life in the universe,” according to the program’s website.

Breakthrough Starshot aims to develop a light sail that would carry a microchip-sized probe at 20% the speed of light. This high-speed pace would see the probe reachAlpha Centauri In just about 20 years, according to a statement.

For reference, Alpha Centauri is about 4 light-years away from Earth, and some experts estimate it would take at least 6,300 years to reach the system with existing technology.

Light sails are not science fiction, nor are they a new idea. Light sails, also known as solar sails, can work to propel spacecraft without the use of rocket fuel. Light sails work when light particles, known as photons, hit the reflective sail, transferring their momentum to the sheet.

Over time, billions upon billions of photons will hit the sail, imparting enough momentum to “push” the craft along.

In 2019, the Planetary Society, a U.S.-based space education and outreach nonprofit, launched a crowdfunded light-sail-powered spacecraft called LightSail 2 to Earth orbit. The cubesat spacecraft is just about the size of a loaf of bread, but its solar sail stretches over about 433 square feet (32 square meters).

The craft’s light sail is made up of four triangle-shaped sections made out of aluminized Mylar. While the craft got to space aboard a SpaceX Falcon Heavy rocket, in orbit it has been maneuvering using the push imparted by sunlight.

Japan’s space agency JAXA has also launched a spacecraft that travels with the help of a solar sail named Ikaros.

Starshot differs from LightSail 2, however. While LightSail 2 relies only on the sun’s photons, Starshot would need more intense light to get to the extreme speeds that project leaders hope to achieve. To do this, the project aims to use Earth-based lasers to focus intense light directly at the prospective Starshot probes’ light sails, sending them quickly on their way after they reach orbit.

In this pair of new studies, researchers investigated the most effective shape and pattern for a light sail.

The first paper, led by Igor Bargatin, a researcher in the department of mechanical engineering and applied mechanics at the University of Pennsylvania, proposes the best material and shape for an interstellar light sail.

First, the study suggests that Starshot’s light sail should be made out of ultrathin sheets of the chemical compound aluminum oxide and the silvery black transition metal molybdenum disulfide.

The team also recommends that, to avoid tearing, the light sail needs to have a significant curve and “billow like a parachute rather than remain flat,” according to the statement.

“The intuition here is that a very tight sail, whether it’s on a sailboat or in space, is much more prone to tears,” Bargatin said in the same statement. “It’s a relatively easy concept to grasp, but we needed to do some very complex math to actually show how these materials would behave at this scale.”

Especially with the high speeds the Starshot team is aiming for, the sail will endure quite a bit of strain being pushed to the extreme. These researchers suggest that the billowy shape will help to keep the sail from breaking under this strain.

“Laser photons will fill the sail much like air inflates a beach ball,” lead author Matthew Campbell, a postdoctoral researcher in Bargatin’s group, said in the same statement. “And we know that lightweight, pressurized containers should be spherical or cylindrical to avoid tears and cracks. Think of propane tanks or even fuel tanks on rockets.”

The second paper explored how a pattern within the sail could most effectively distribute the heat from the light coming from the lasers on Earth.

“If the sails absorb even a tiny fraction of the incident laser light, they’ll heat up to very high temperatures,” lead author Aaswath Raman, a researcher in the department of materials science and engineering at the University of California, Los Angeles, said in the same statement. “To make sure they don’t just disintegrate, we need to maximize their ability to radiate their heat away, which is the only mode of heat transfer available in space.”

Previously, researchers have suggested that the “fabric” of a light sail could be covered in tiny, evenly spaced holes to deal with this overheating concern. However, these researchers suggest that the sail could have holes in addition to the sail fabric being put together in a grid pattern to maximize heat distribution.

“A few years ago, even thinking or doing theoretical work on this type of concept was considered far-fetched,” co-author Deep Jariwala, a researcher who works with Bargatin at the University of Pennsylvania, said in the same statement. “Now, we not only have a design, but the design is grounded in real materials available in our labs. Our plan for the future would be to make such structures at small scales and test them with high-power lasers.”

These papers were published Feb. 16 in the journal Nano Letters.