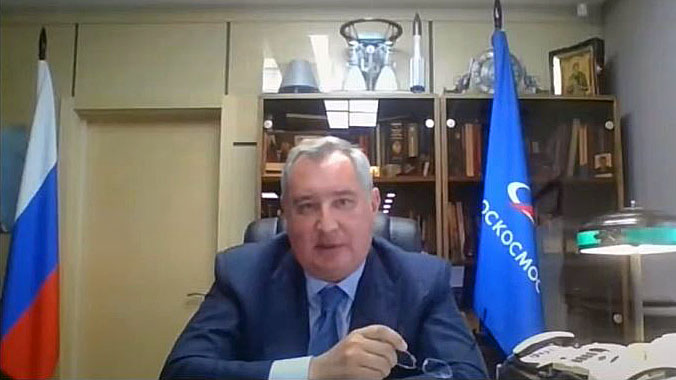 The space partnership between Russia and the U.S. looks shakier and shakier every day.

That partnership has been fraying badly since Russia invaded Ukraine on Feb. 24, spurring the United States and a number of other countries to impose new economic sanctions. Russian space officials have decried these sanctions; in response, they have stopped the sale of Russian-made rocket engines to American companies and halted launches of Russian-built Soyuz rockets from Europe’s Spaceport in French Guiana, among other measures.

Dmitry Rogozin, the head of Roscosmos, Russia’s federal space agency, has even called into question the nation’s participation in the International Space Station program. The blustery Rogozin has fired off a number of incendiary tweets recently — including some aimed at former NASA astronaut Scott Kelly.

Kelly is no random target; the former astronaut has tweeted frequently in Russian about the Ukraine invasion, and he has taken specific aim at Roscosmos and Rogozin.

For example, last week, Rogozin tweeted out a video of technicians taping over the flags of the United States, Japan and other nations on the Soyuz rocket that was supposed to launch 36 internet satellites for the United Kingdom-based company OneWeb from the Russia-run Baikonur Cosmodrome in Kazakhstan. That launch, scheduled for March 4, did not happen, because OneWeb and the U.K. government, which owns part of the company, declined to meet new demands imposed by Roscosmos.

“The launchers at Baikonur decided that without the flags of some countries, our rocket would look more beautiful,” Rogozin wrote in Russian. (Translation provided by Google; the below quotes are also Google translations of Russian-language tweets, unless otherwise indicated.)

Kelly responded to that tweet on Sunday (March 6), writing, “Dimon, without those flags and the foreign exchange they bring in, your space program won’t be worth a damn. Maybe you can find a job at McDonald’s if McDonald’s still exists in Russia.”

Rogozin fired back with a tweet that read, “Get off, you moron! Otherwise the death of the ISS will be on your conscience!” That tweet was soon deleted, and Kelly asked for an explanation. “Dimon, why did you delete this tweet? Don’t want everyone to see what kind of child you are?” the former astronaut tweeted Monday (March 7).

“Dimon” is a familiar form of “Dimitry,” and Kelly’s use of it did not sit well with Rogozin.

“Mr. Scott Kelly! You needlessly provoke me. We are not familiar with you, but you … call me ‘Dimon,’ although I do not know such a treatment and I will not allow you to behave like that with me. You are being defiant and destructive,” Rogozin tweeted Monday, this time in English.

“Perhaps the dementia and aggression that you have developed is a consequence of the overload and stress of four flights into space. I invite you to undergo an examination at the Brain Institute of our Federal Medical and Biological Agency,” the Russian space chief added in another tweet Monday, also in English.

Kelly visited the International Space Station on three of his four spaceflights, spending about a year aboard the orbiting lab on his final mission, which ran from March 2015 to March 2016. (His other flight was a space shuttle mission that serviced the Hubble Space Telescope in 1999.) All astronauts who visit the space station must speak both English and Russian, which explains Kelly’s ability to address Rogozin in the latter’s mother tongue.

Rogozin is no stranger to aggressive, contentious language. In 2014, for example, when he was Russia’s deputy prime minister, Rogozin suggested that NASA use a trampoline to send its astronauts to the space station. This was an expression of displeasure with sanctions imposed after Russia’s invasion of Crimea; at the time, Soyuz spacecraft were the only vehicles capable of carrying astronauts to and from the orbiting lab.

And just last week, when announcing that Russia would no longer sell rocket engines to U.S. companies, Rogozin said on Russian television, “Let them fly on something else, their broomsticks, I don’t know what,” according to Reuters.