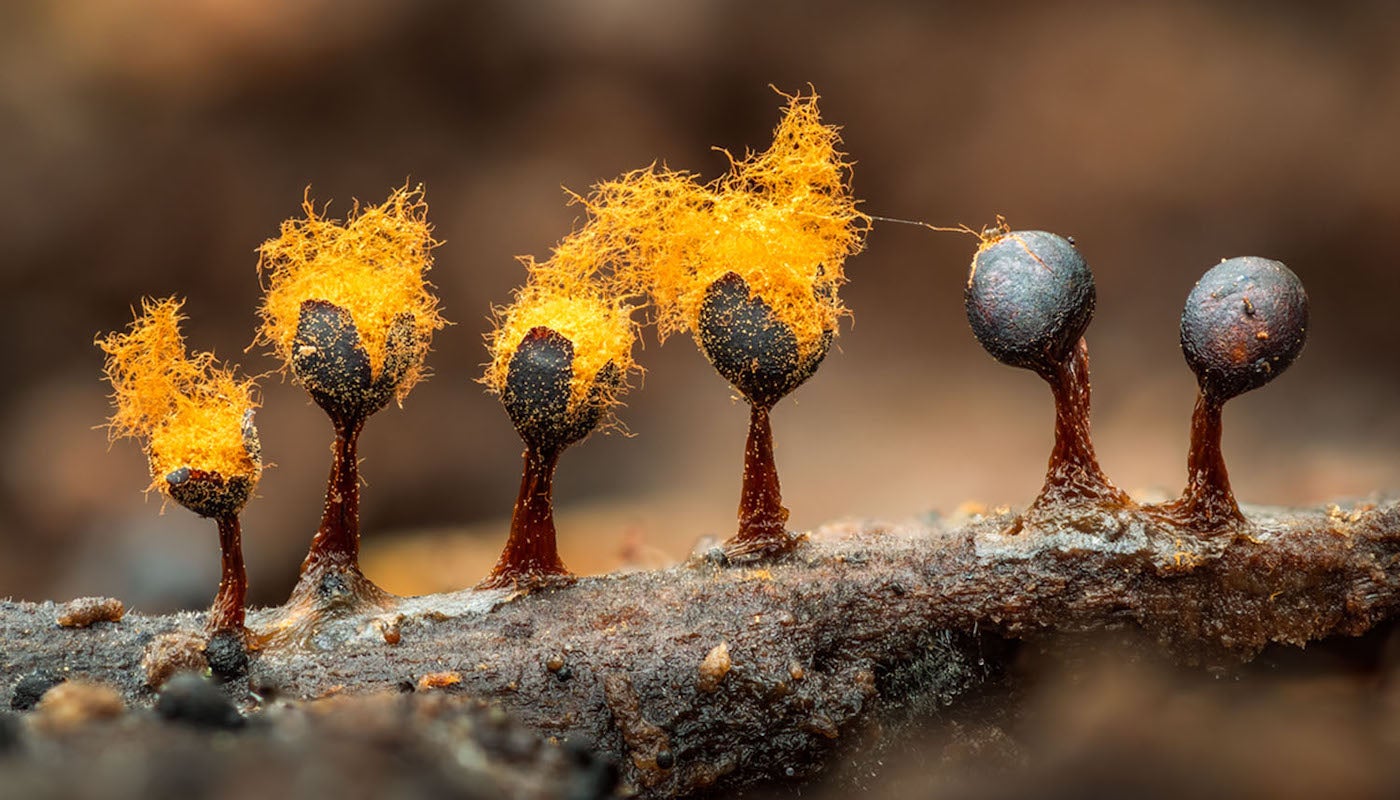 When Barry Webb is crawling around on the forest floor with a flashlight, passersby understandably give him strange looks. After all, the U.K.-based photographer is looking for something others might struggle to see: slime mold growths that only stand around a tenth of an inch high.

For scientists, classifying slime molds has proved to be as slippery as their namesake. Though they have been labeled plants, fungi and even animals in the past, the protists coat wet and frequently decaying surfaces such as dead trees, leaf litter and even dung, often as single cells. As their last act before dying, the organisms send up fruiting bodies, which Webb catches with a camera. These growths are what attracted Webb to slime molds in the first place. While out walking with him, Webb’s wife suggested he look through his camera lens at a funny white patch on a beech tree. “I was amazed to see these little white sausages on sticks,” he says.

The find sparked Webb to document more of the ephemeral slime mold growths. Each image consists of 30 to 100 photographs he took with different focal points. When assembled, the composite shows more detail than any one snapshot could. Most of the specimens Webb photographs are found in the woods near his home in the English county of Buckinghamshire, but some grow on decaying logs he keeps in his garden to see what might emerge . If you would like to try something similar, doing so is easy—just beware hungry slugs, Webb warns.

Arcyria cinerea: When Webb spotted this slime mold growing on a dead apple tree, he did what researchers investigating the creatures have done for more than a century bring chunks of the wood home to see what else it would sprout.

Cribraria aurantiaca growing fruiting bodies. Slime molds such as C. aurantiaca always occupy new patches of a wet log or other surfaces. The organisms leave residue behind as they scoot around and avoid places already streaked with their goo.

Cribraria aurantiaca after the fruiting bodies have matured. Though the image shows a different specimen than the one above, this later, more dehydrated stage can develop within a day for some species.

Member of the genus Comatricha that is dried out after its spores have dispersed. In its earlier, mobile life stage, the quest for moisture, nutrients and delicious bacteria can take a slime mold to any appropriate living space, even animal dung.

Comatricha nigra pushing up a single fruiting body. Slime molds like those in the genus Comatricha find the perfect place to settle down by scooting around via pseudopods—cellular extensions that shoot forward for the rest of the cell to coalesce around.

Comatricha nigra growing on a fallen beech log just before the protist releases its spores. Before reproducing, some slime molds expand to be several feet wide, a phenomenon Webb has come across in the woods.

Compilation of different Badhamia utricularis slime molds moving through their life cycle. On the far left, B. utricularis is still a moving, feeding organism. It eventually generates its characteristic hanging and unusually large spores, which mature into fruiting bodies (center) and then finally dry up once the spores have been dispersed (far right).

Physarum leucophaeum on the edge of a beech leaf. These slime molds are impressive problem solvers. Researchers have plopped other members of the genus Physarum into mazes and watched the them find the shortest path through. These organisms have inspired a slime mold algorithm that researchers have deployed to map filaments of dark matter connecting galaxies throughout the universe.

Fruiting bodies of Ceratiomyxa fruticulosa. Resembling miniature white coral, this standout species typically appears in clusters and offers individual spores on the surface of each tendril.