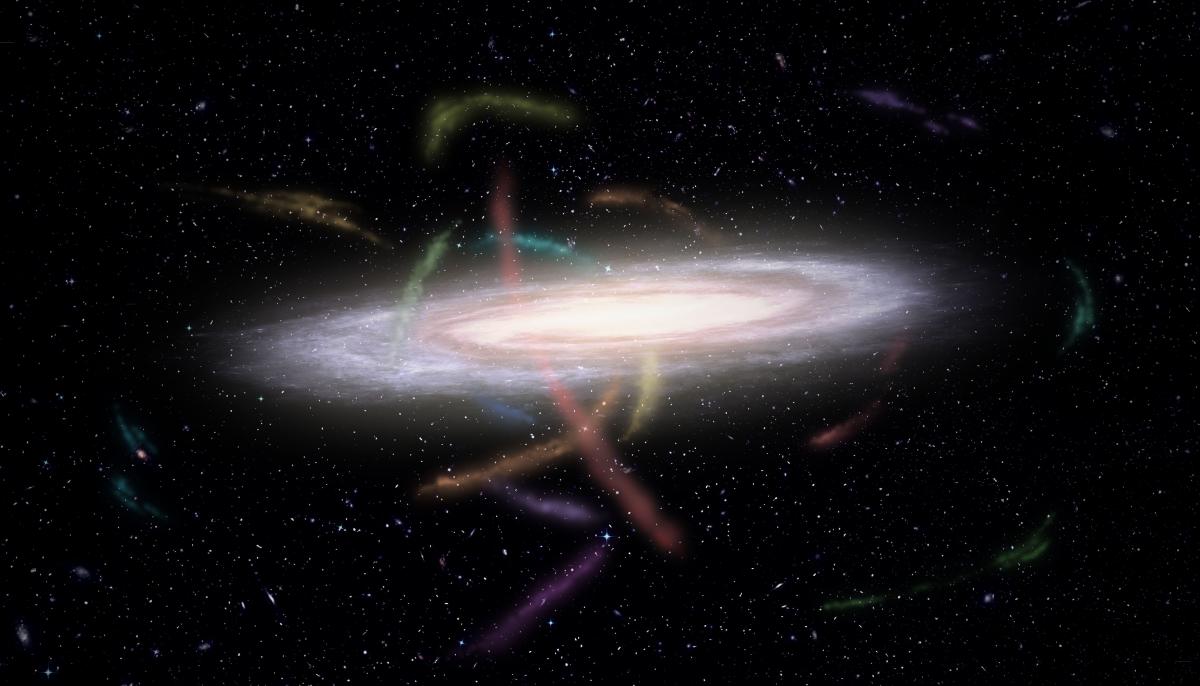 Stellar groupings orbiting in the outskirts of the Milky Way shed new light on the evolution of our galaxy as well as the elusive dark matter that surrounds it.

Scientists from the Carnegie Institution for Science mapped a dozen associations of stars that orbit within the gaseous halo that envelopes our galaxy, the Milky Way. The stars form elongated threads, called stellar streams, which arc around the host galaxy’s edges. Studying these stellar structures helps astronomers better understand the distribution of dark matter in our galaxy and retrace how the galaxy grew over time by devouring smaller groups of stars.

Dark matter is the invisible stuff that makes up to 85% of all matter in the universe. It has never been seen but must exist to make sense out of the gravitational forces observed in the galaxy, which keep stars in their orbits

“Stellar streams are the shredded remains of neighboring small galaxies and star clusters that are torn apart by the Milky Way,” Josh Simon, co-author of the study and astronomer from the Carnegie Institution for Science, said in a statement. “These remnants continue to move together in long, arcing threads, orbiting around our galaxy.”

Previous studies focused on individual streams, but the goal of this study was to measure the properties of as many stellar streams as possible.

“When studied as a group, the properties of these stellar streams reveal the presence of the invisible dark matter of the Milky Way in the same way that twinkle lights can reveal the shape of a tree that they are strung up around, even when we can’t see the branches or foliage,” the scientists said in the statement.

Using the Anglo-Australian Telescope, located at the Siding Spring Observatory in Australia, as well as data from the European Space Agency’s (ESA) Gaia space telescope, the researchers measured the speeds at which the streams orbit the Milky Way and analyzed their chemical composition.

The fact that stars in these streams have a distinct chemical composition compared to most stars in the Milky Way provides evidence that they indeed arrived from different stellar populations, dwarf galaxies and clusters of stars that got caught by the larger galaxy’s gravitational pull hundreds of millions and billions of years ago.

“We are seeing these streams being disrupted by the Milky Way’s gravitational pull, and eventually becoming part of the Milky Way,” Ting Li, lead author of the study from the University of Toronto, said in the statement. “This study gives us a snapshot of the Milky Way’s feeding habits, such as what kinds of smaller stellar systems it ‘eats.’ As our galaxy is getting older, it is getting fatter.”

Understanding how the Milky Way gradually devours smaller galaxies that fall into its clutches helps astronomers  unravel galaxy’s evolution over billions of years from the first stars that came together after the Big Bang to the massive galaxy of hundreds of billions of stars that we see today.

The study, part of the Southern Stellar Stream Spectroscopic Survey (S5), was accepted for publication in the The Astrophysical Journal.