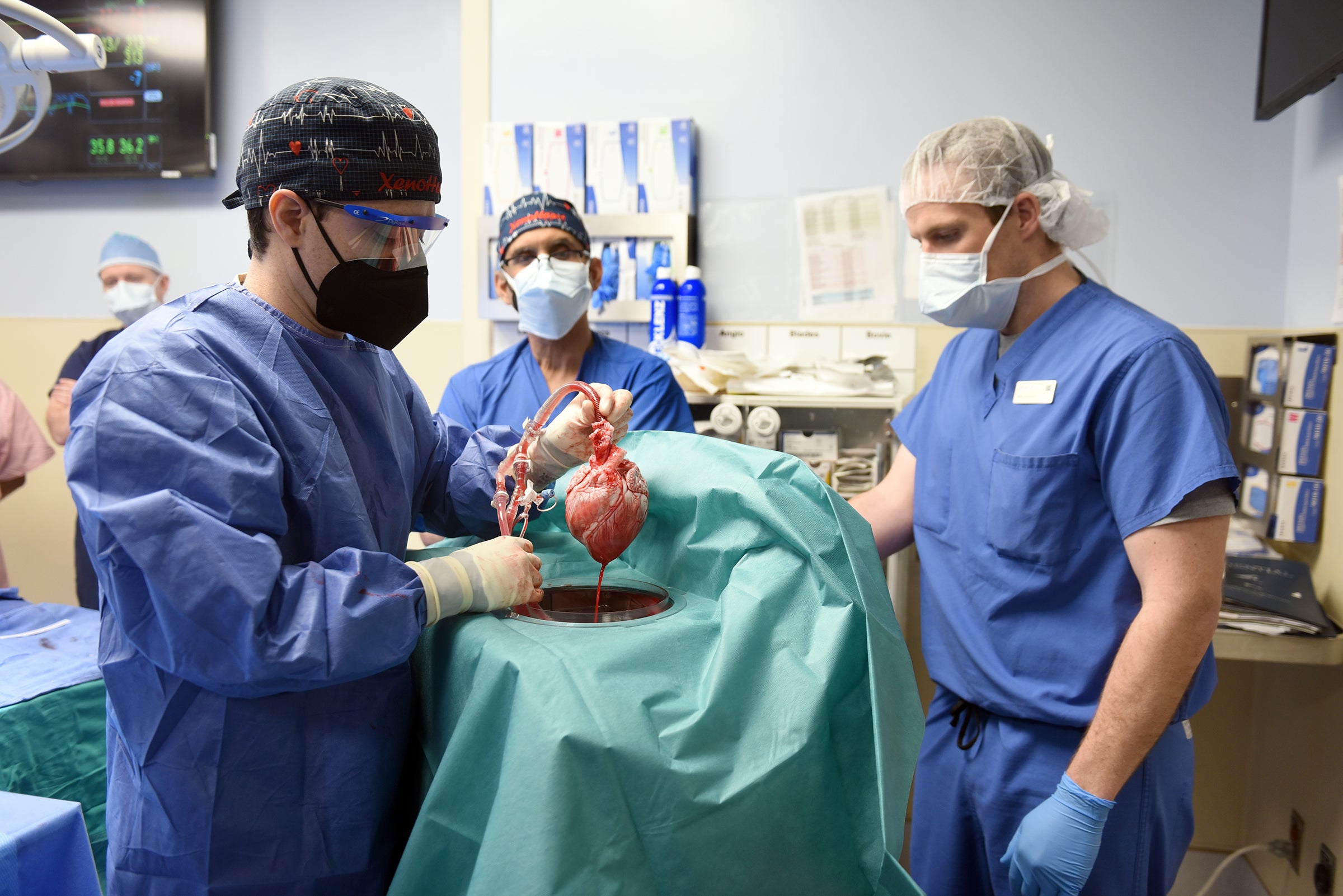 Doctors have transplanted the heart from a genetically modified pig into the chest of a man from Maryland in a last-ditch effort to save his life. The first-of-its-kind surgery is being hailed as a major step forward in the decades-long effort to successfully transplant animal organs into humans.

Although it’s been tried before—one of the earliest subjects, known as Baby Fae, survived 21 days with a baboon’s heart in 1984, according to Time—the practice has fallen into disuse because the animal organs are usually quickly rejected by their human host.

But doctors say this new transplant is a breakthrough because the donor pig had undergone gene-editing to remove a specific type of sugar from its cells that’s thought to be responsible for previous organ rejections in patients.

The surgery took place on Friday (Jan. 7), and after four days the human patient is breathing on his own, although he is still connected to a heart-lung machine to strengthen his blood circulation, according to a statement from the University of Maryland Medical Center (UMMC). The next days and weeks will be critical to whether he survives the operation.

The man, 57-year-old David Bennett from Maryland, has terminal heart disease, but several medical centers had determined that he was ineligible for a human transplant, the statement said.

“It was either die or do this transplant. I want to live. I know it’s a shot in the dark but it’s my last choice,” Bennett said the day before his surgery. “I look forward to getting out of bed after I recover.”

The pig-to-human surgery in Maryland was given emergency approval on New Year’s Eve by the U.S. Food and Drug Administration through a provision that allows experimental treatments to be used when there is no other option to save a patient’s life, the statement said.

“This was a breakthrough surgery and it brings us one step closer to solving the organ shortage crisis,” Dr. Bartley Griffith, director of the Cardiac Transplant Program at UMMC and the surgeon who performed the transplant, said in the statement. “There are simply not enough donor human hearts available to meet the long list of potential recipients.”

The doctors involved in the transplant were proceeding cautiously, but they were optimistic about the procedure’s life-saving potential, he added.

More than 100,000 people in the U.S. are currently awaiting for an organ transplant, and over 6,000 people die each year before getting one, according to the federal government’s organdonor.gov website.

If the method of genetically modifying donor animals so that their organs are less likely to be rejected by human hosts proves successful in the long-term, such procedures might be an option for many other patients awaiting transplants.

The experimental practice of transplanting animal organs into humans—known as xenotransplants—was largely abandoned after the Baby Fae case in 1984.

She had been born with a terminal heart condition, and doctors hoped that the transplant of a baboon heart could help her stay alive.

But Baby Fae’s immune system rejected the foreign heart, and she died within a month of the procedure.

Pigs are considered suitable heart donors because their hearts are roughly the same size and shape as human hearts.

Pig heart valves have been used successfully for decades to replace damaged heart valves in humans, but until now the possibility of a fatal immune system reaction has prevented entire hearts from being transplanted.

The University of Maryland School of Medicine has received more than $15 million in research grants to evaluate the transplants of hearts from genetically modified pigs, according to the statement.

The method involves using gene-editing to “knock out” three genes from the donor pig’s genome that activate a rapid immune system response in the human recipient, and adding six human genes that aid the organ’s acceptance. One other gene was deactivated in the pig so that the heart doesn’t grow too large. Drugs for suppressing the human immune system, Including an experimental medicine, were also used in the patient.

“If this works, there will be an endless supply of these organs for patients who are suffering,” Dr. Muhammad Mohiuddin, the scientific director of the university’s animal-to-human transplant program, told the Associated Press.