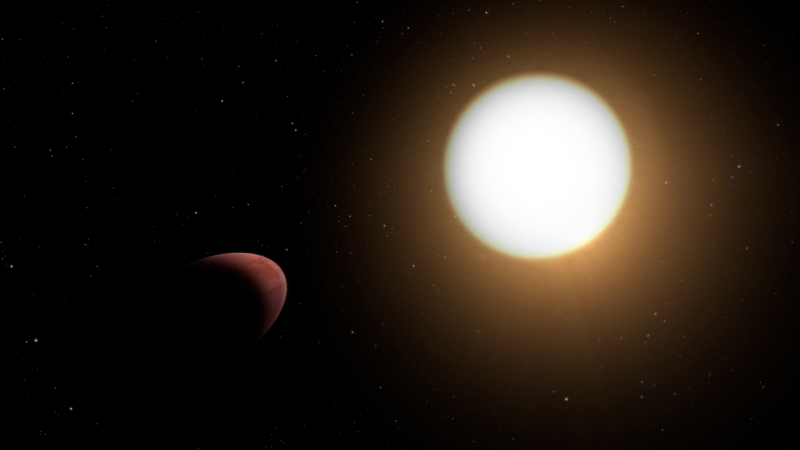 A distant exoplanet looks more like a football than the usual sphere, researchers report in a groundbreaking new study.

The strange shape of ultrahot WASP-103b, which is more than 1,000 light-years from Earth, is due to the planet being stretched by the gravitational forces of its parent star, according to the new research.

WASP-103b was discovered in 2014. The exoplanet is considered a “hot Jupiter” because it orbits its parent star in just a single Earth day, putting it extremely close to the star’s radiation and strong gravity. The strong tidal forces induced in the planet are similar to the tides the moon induces in our oceans on Earth, but in a much more extreme fashion, according to a statement from the University of Geneva.

“Because of its great proximity to its star, we had already suspected that very large tides are caused on the planet, but we had not yet been able to verify this,” study co-author Yann Alibert, professor of astrophysics at the University of Bern in Switzerland, said in the statement.

The new observations of WASP-103b came courtesy of the CHaracterizing ExOPlanets Satellite (CHEOPS), a European space telescope that launched in December 2019.

Researchers also used previous observations made by NASA’s long-running Hubble Space Telescope and the now-retired Spitzer Space Telescope, which gathered information across several “transits,” or passes of the planet across the face of its star from the perspective of Earth.

“After observing several such so-called ‘transits,’ we were able to measure the deformation. It’s incredible that we were able to do this — it’s the first time such an analysis has been done,” study co-author Babatunde Akinsanmi, a researcher at the University of Geneva, said in the same statement.

The transits also allowed the scientists to study the interior of the planet, which they suggest is similar to that of Jupiter in our own solar system. They used a parameter called a “Love number” (named after British mathematician Augustus E. H. Love) to show how mass is distributed within WASP-103b, although the team determined more observations are needed to nail down the number.

“The resistance of a material to deformation depends on its composition,” Akinsanmi said. “We can only see the tides on Earth in the oceans. The rocky part doesn’t move that much. Therefore, by measuring how much the planet is deformed, we can determine how much of it is made up of rock, gas or water.”

The team added that they hope for more observations with CHEOPS, along with perhaps some telescope time on NASA’s newly launched James Webb Space Telescope, to further narrow down the Love number and the associated tidal deformation and internal structure of WASP-103b. (Webb isn’t expected to start making science observations until this summer, and time on the telescope is highly competitive.)

“This would improve our understanding of these so-called ‘hot Jupiters’ and allow a better comparison between them and giant planets in the solar system,” study co-author Monika Lendl, a professor of astronomy at the University of Geneva, said of the benefit of any future observations the team can obtain of WASP-103b.

The new study was published in the January 2022 edition of Astronomy and Astrophysics. It was led by Susana Barros, a researcher at Portugal’s Institute of Space Astrophysics and Science.