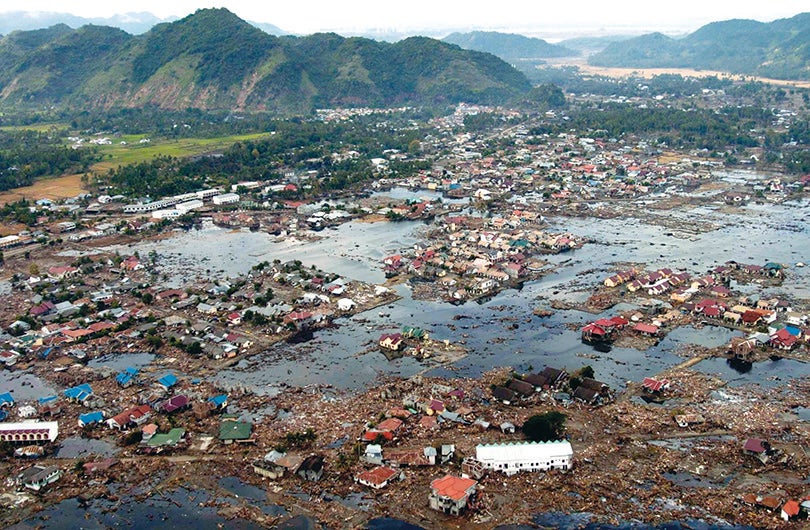 Editor’s Note (1/18/22): On January 15 the eruption of a volcano near Tonga triggered a far-ranging tsunami. This story about detecting tsunamis created by earthquakes is being republished in light of this event.

Buoys operate as today’s state-of-the-art tsunami-detection system. Seismic data can tell officials that an underwater earthquake has occurred, but strategically placed floating sensors often give the key warning if the earthquake has created a potentially devastating series of waves. Even so, warnings are often issued only minutes before a tsunami hits—if at all. Aiming to buy more time for evacuations, scientists have begun decoding a new aspect of the sounds that underwater earthquakes produce. Sound waves can travel at upward of 1,500 meters per second through water—more than 10 times faster than a tsunami.

Usama Kadri, an applied mathematician and engineer at Cardiff University in Wales and the Massachusetts Institute of Technology, is one these researchers. He is especially interested in the “acoustic gravity waves” that tsunami-generating earthquakes produce. These underwater sound waves have such low frequencies that gravitational forces can alter their wavelength and speed under a sudden change in pressure. In theory, these sound waves’ distinctive properties could allow scientists to tease them out from oceanic background noise. “Without acoustic gravity-wave theory, you can say for sure there’s an earthquake, but you can’t say there’s a tsunami,” Kadri says.

As outlined in the Journal of Geophysical Research, Kadri ran a simulation with data from the December 2004 Indian Ocean tsunami, which killed hundreds of thousands of people. It took two hours for those waves to hit Sri Lanka, for example, but the island nation received no tsunami warning. According to the study’s calculations, if an acoustic gravity-wave-detection station with hydrophones had been 1,000 kilometers from the earthquake epicenter, that warning time could have been more than 90 minutes.

Kadri’s work is important but still theoretical—and contains simplified assumptions, says Ali Abdolali, a postdoctoral researcher at the University of Delaware’s Center for Applied Coastal Research. Abdolali is also trying to decipher the underwater sound waves that emanate from a tsunami-causing quake. In fact, researchers have known for more than 60 years that underwater earthquakes give off specific sounds, but the availability of sensitive hydrophones and faster computing has sparked renewed interest in this field, says Tiago Oliveira, a postdoctoral fellow at the Woods Hole Oceanographic Institution who has worked with Kadri. Still, Oliveira cautions that it could be 10 years or more until tsunami-warning systems can rely on sound.