Although meteorites are known to fall all over the world, the environment and unique processes in Antarctica make them somewhat easier to find on the pristine, snowy landscape. Still, collecting meteorites in Antarctica is physically grueling and hazardous work.

But what if there was a “treasure map” which showed the most probable places to find meteorites in Antarctica, directing researchers where to look?

Researchers from Delft University of Technology in The Netherlands have used artificial intelligence to create a type of treasure map to identify zones where meteorites can be found with high probability.

“Through our analyses, we learned that satellite observations of temperature, ice flow rate, surface cover and geometry are good predictors of the location of meteorite-rich areas,” said Veronica Tollenaar, who led the study, published in Science Advances. “We expect the ‘treasure map’ to be 80 percent accurate.” Researchers collecting meteorites on the ice. (Delft University of Technology)

Based on the study, the scientists calculate that more than 300,000 meteorites are out there on the Antarctic landscape, waiting to be found. This represents enormous scientific potential.

“We found several never-visited meteorite-rich areas that are relatively close to research stations,” said Stef Lhermitte, who was involved in the study along with assistant professor David Tax from TU Delft.

Rocks from space have been accumulating in Antarctica for millennia, preserved in the continent’s cold, desert-like climate. Meteorites fall and become embedded in ice sheets within the continent’s interior. As the glaciers slowly flow, the meteorites are carried with them.

If a glacier runs up against a large obstacle, in spots like the Transantarctic Mountains, the ice rises and meteorites are brought to the surface.

Additionally, dry Antarctic winds gradually erode the ice, exposing the meteorites. As more ice rises to the surface, the process repeats. Given enough time, a significant accumulation of meteorites builds up. Meteorites are too small to detect from individually from space, but with indirect satellite measurements such as temperature, speed of the ice flow, the surface slope, and the way the ice reflects radar signals, combing all that data and using machine learning, the researchers said they can predict where meteorites concentrate at the surface.

One of the areas that are known to contain meteorites are in the continent’s blue ice areas. The contrasting blue ice makes it easy to detect and collect meteorites during Antarctic field work missions.

“Antarctica is very remote and many areas have never been visited,” said Tollenaar in a press release. 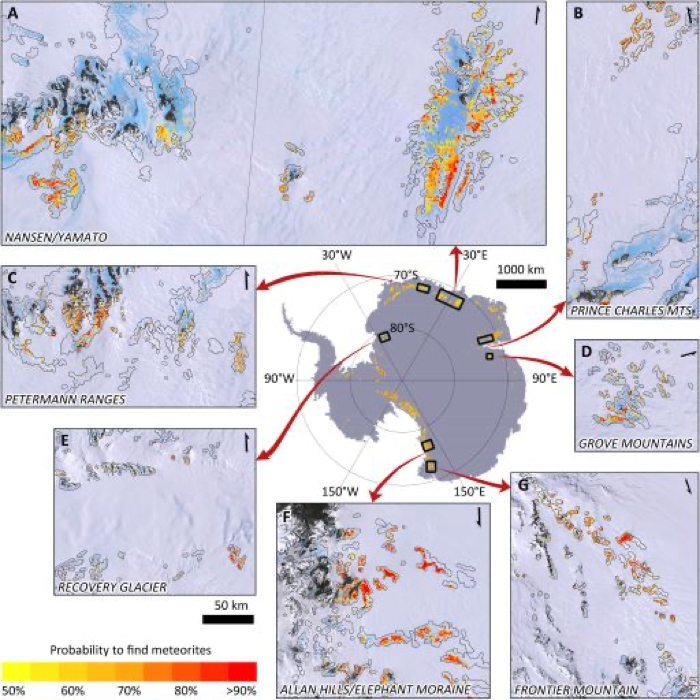 “Moreover, the reports on the success of previous meteorite recovery missions are often ambiguous and not very detailed, which leads to a lack of good-quality labels. To circumvent this problem, we relied on ‘positive and unlabeled learning’, an emerging field in machine learning.”

You can see the interactive treasure map here, to search the Antarctic continent and explore locations with a high potential to find meteorites.