A mountain-sized mass of igneous rock beneath the coast of southern Japan could be acting as a sort of magnet or lightning rod for huge earthquakes.

According to a new 3D visualization of the feature, known as the Kumano Pluton, the tectonic energy from megaquakes seems to be diverted to several points along its side.

This could help scientists better predict the impact of massive quakes in the region, as well as better understand how these igneous masses interact with tectonic activity.

“We cannot predict exactly when, where, or how large future earthquakes will be, but by combining our model with monitoring data, we can begin estimating near-future processes,” says geophysicist Shuichi Kodaira of the Japan Agency for Marine-Earth Science and Technology in Japan.

“That will provide very important data for the Japanese public to prepare for the next big earthquake.”

Hints of the Kumano Pluton were first revealed in 2006. It is, as the name suggests, a rock feature known as a pluton – an intrusion of igneous rock that displaces rock underground, slowly cooling and hardening in a large chunk. 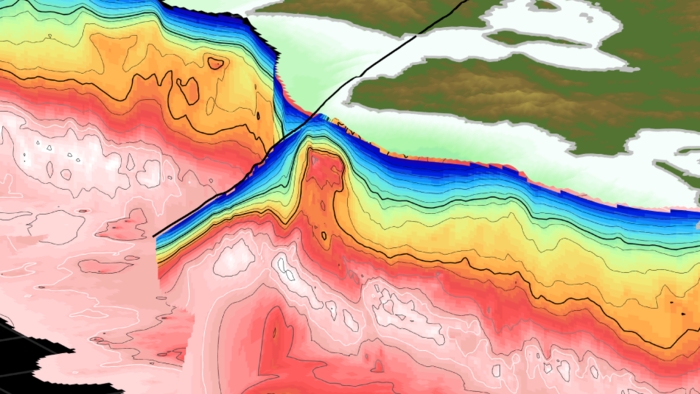 Above: The Kumano Pluton appears as a red bulge (indicating dense rock) in the 3D visualization.

Seismic imaging revealed that there was something of a different density to the surrounding rock on the Nankai subduction zone; that’s the region along which one tectonic plate slips beneath the edge of another, accompanied by heightened earthquake and volcanic activity. Numerical simulations helped reveal that the chunk was plutonic.

But the true extent of it remained unexplored. Now, using 20 years’ worth of seismic data from the Nankai subduction zone, a team of researchers has mapped the entirety of the Kumano Pluton.

Quakes and tremors, while destructive, can also be a very powerful tool, you see. Quakes are quite marvelous things, really. They ripple out from their point of origin, propagating through the planet, and bouncing around.

The way these seismic waves travel through and reflect off certain materials allows seismologists to map structures we can’t see deep underground.

It was painstaking work, comprising not just the millions of seismic recordings from Japan’s network of earthquake sensors, but also those of other passing scientific surveys, for the largest seismic data set ever created.

The vast amount of data the team compiled on the Nankai subduction zone was fed into the LoneStar5 supercomputer at the University of Texas at Austin to generate a high-resolution 3D model of the pluton. Fascinatingly, it revealed features we hadn’t seen before.

The model shows that the pluton’s weight is causing Earth’s crust beneath it to bend under the strain, and bulge upward slightly above it. Surprisingly, the pluton seems to be providing a pathway for groundwater to seep beneath Earth’s crust into the upper mantle by exacerbating the bending of Earth’s crust.

Because the Kumano Pluton is so dense and rigid, it is also likely playing a significant role in tectonic activity.

Huge earthquakes with magnitudes higher than 8 originated on the flanks of the pluton in 1944 and 1946. Given that subducting slabs are highly sensitive to variations in structure, the pluton is likely having a profound effect on both the geometry and tectonic activity in the region.

The team hopes that their discovery will prompt thorough investigations into the subterranean structures that might be hiding in other subduction zones.

“The fact that we can make such a large discovery in an area that is already well studied is, I think, eye opening to what might await at places that are less well monitored,” says geophysicist Adrien Arnulf of the University of Texas Institute for Geophysics.

The research has been published in Nature Geophysics.