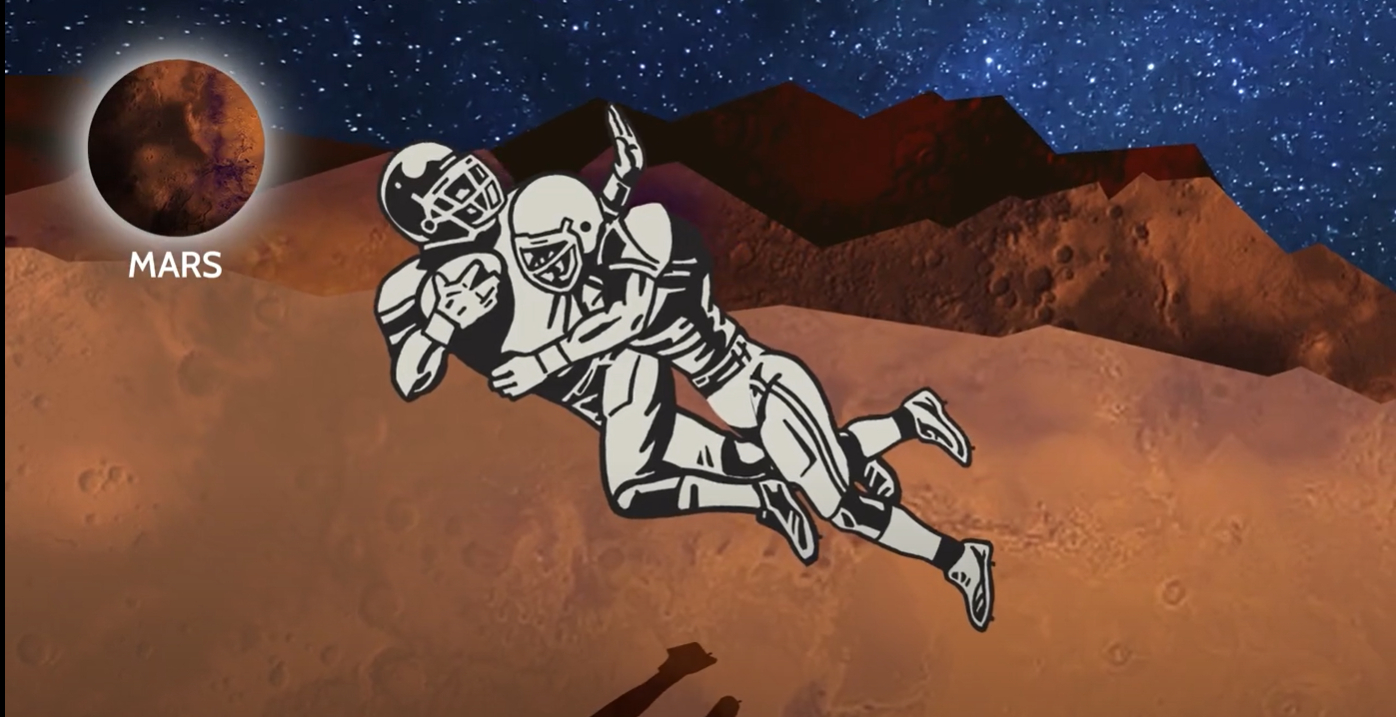 Ever wonder if it’d be possible to play football on Mars? The short answer is yes!

In a new video from NBCLX, United Launch Alliance CEO Tory Bruno and NBC sports producer Brad Fosler explain what Super Bowl LVI would look like on Mars as Los Angeles Rams face off against the Cincinnati Bengals at SoFi Stadium in Inglewood, California today. The first obstacle: getting players to the Red Planet.

“We can only fly to Mars once every 26 months, when our two planets are just passing each other in orbit,” Bruno said in the video, which NBCLX shared on YouTube on Feb. 9. “The trip itself takes about seven months. If we’re using an Orion capsule to get us out there, it’s going to take 10 trips just for one football team.”

While there are plenty of wide-open, flat areas on Mars, the Martian landscape is a bit more rugged, dry and dusty than football players are used to on Earth. Therefore, an artificial turf would definitely need to be set up for a game of football on Mars.

On Earth, the Super Bowl occurs in February. However, given Mars’ extreme seasonal variations, it’s important to consider the best time of year for a game of football on the Red Planet. With the winter temperature on Mars dropping as low as minus 200 degrees Fahrenheit (minus 128 degrees Celsius), the ideal time for a Super Bowl game would be during the Martian summer, when temperatures average 70 degrees Fahrenheit (21 degrees Celsius).

Terrain and temperatures aside, the uniforms would also look quite a bit different for football players on the Red Planet. Since the atmosphere of Mars is much thinner than Earth’s and 95% carbon dioxide, players will need to wear spacesuits.

“The good news is, with the reduced gravity on Mars — only about a third of the Earth — they’re not going to mind that weight,” Bruno said in the video.

However, the reduced gravity on Mars also means that tackling, kicking and throwing the football may feel different for the players. Not to mention, the football itself would need to be inflated with only one percent of the amount of air used to inflate footballs on Earth — otherwise, it would explode, according to the video.

“A tackle on Mars is going to be a little different. That first impact is going to feel just the same for the players because mass is mass anywhere in the universe, but with the reduced gravity on Mars, that landing is going to be an awful lot softer,” Bruno explained, adding that “a standard 25-yard pass on Earth is going to go more like 200 yards on Mars, because of the reduced gravity and because of the much reduced aerodynamic drag. I’ll predict that on Mars, the passing game is really going to dominate — you could actually attempt a field goal credibly from the opposite end of the field.”

So while playing football on Mars is technically possible, it would take a lot of training and planning to get all the materials and players to the Red Planet for a Super Bowl game. And for fans on Earth, there would be between a five and 20 minute delay in the broadcast. However, Perseverance’s Ingenuity helicopter could beam back some good aerial shots of the game.