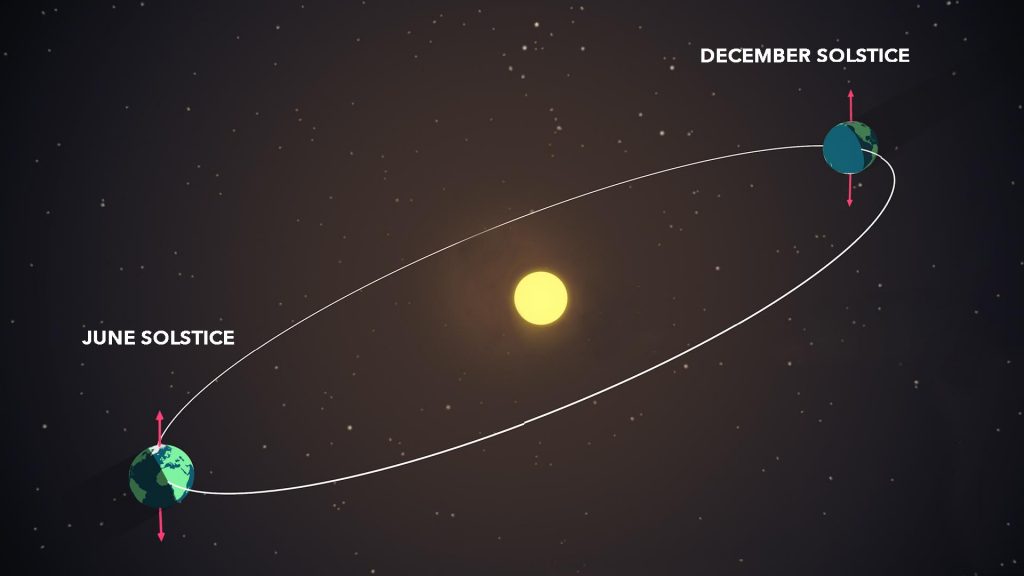 The winter solstice of 2021 occurs today (Dec. 21), marking the official beginning of winter in the Northern Hemisphere and it brings good news:  From tomorrow on, days will start getting longer again, taking us out of the darkness as we slowly head towards spring.

The winter solstice marks the moment in Earth‘s orbit around the sun when the planet’s South Pole is the most tilted towards the star. That means the Southern Hemisphere is receiving a lot of sunshine (and the start of its summer season) while the Northern Hemisphere is receiving much less. This effect is caused by the inclination of the axis around which Earth rotates with respect towards the plane of its orbit around the sun. On Earth, the effect can be observed as a regular shift of the path that the sun travels from East to West between sunrise and sunset.

Related: What is the summer solstice? An astronomer explains

On the winter solstice, this path reaches its southernmost point, appearing directly above the Tropic of Capricorn.

For us in the Northern Hemisphere, the sun today will follow the shortest arc above the horizon. The more towards the North Pole you go, the shorter the day will be. On the equator, daylight will last 12 hours. New York, for example, will only get 9 hours and 15 minutes of daylight, with the sun rising at 7:16 am EST and setting at 16:31 EST. London will get even less daylight, just under 8 hours, while areas behind the Arctic Circle will be submerged in darkness 24/7.

At exactly 10:59 EST, this annual pendulum will start swinging back, with the North Pole reaching the farthest tilt away from the sun and starting to lean back towards it.

The winter solstice has traditionally been an important moment for ancient cultures, aware of their dependence on the sun for their survival. In the U.K, neo druids will gather on Tuesday night at the iconic Stonehenge to celebrate the beginning of the star’s return.

On the internet, Google is marking the occasion with a cute doodle of a dreamt hedgehog, accessorized with pine cones and twigs, enjoying a snowy walk. People in the Southern Hemisphere, where the solstice marks the start of summer, got a sunny variant with the hedgehog walking around with a definite beach vibe.

Today’s #GoogleDoodle celebrates the beginning of winter to those north of the equator ❄️🌎#DidYouKnow? Today is the winter (or hibernal) solstice, a day when the path of the Sun is the farthest south it will be all year in the Northern Hemisphere ☀️→ https://t.co/UOKJ12oc7K pic.twitter.com/5Xpa5b0RpgDecember 21, 2021

To everyone across the Southern Hemisphere: Happy first day Summer ☀️#DidYouKnow? Today, the North Pole shifts to almost directly facing the sun, bringing the longest day of the year!#GoogleDoodle → https://t.co/FxCkElr5qx pic.twitter.com/zbO3IVspZTDecember 21, 2021