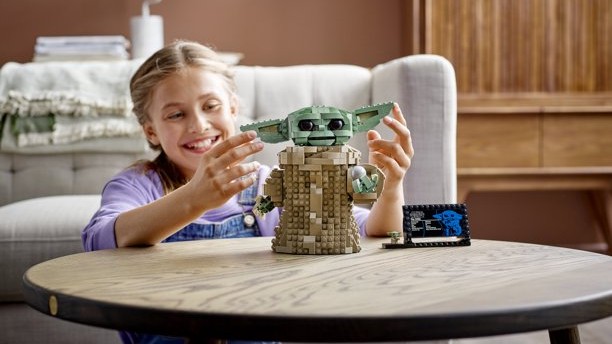 There’s no doubt that the star of the Disney Plus series “The Mandalorian” is the character that viewers have affectionately dubbed “Baby Yoda.” Now fans of the series can enjoy building their very own Lego model of the Star Wars icon.

If you were looking for a Lego Grogu (it’s his real name, after all) to call your own and missed the deep sales on Black Friday, you’re in luck. This Lego Star Wars The Child build-and-display model is still on sale right now at Walmart for $64.00 at Walmart. (Check out our guide for the best Lego Star Wars deals for more options if The Child isn’t strong enough with the Lego Force.)

This set of Lego bricks allows the gift recipient to assemble a 7.5-inch-tall (19 centimeters) model of Baby Yoda, a character officially known as The Child or Grogu. This Lego toy features a posable head, ears and mouth so the toy can be adjusted to show different expressions once assembled.

The final finished model of The Child is conveniently sized so that it can be displayed easily in many parts of a child’s room or home.

This toy is recommended for children 10 years of age or older, but older enthusiasts will enjoy it as well.

Lego has been developing sets and figures from the Star Wars universe since 1999. This latest Star Wars toy set contains 1,073 pieces. Most of the bricks come either in green for The Child’s skin or in beige for the character’s cloak.

The set includes clear but meticulous instructions to assemble the toy model. Many customers who have reviewed the toy on Walmart’s website have said that assembling the product is the most enjoyable part. The final model is easy to display and some people have shared that they like how The Child’s pose and expressions can be adjusted. One person did comment that there is a limit to how much you can play with the model, though. Most of the joy of the final model is seeing how cute it looks in the home.

Some people also loved the details in the set. This Lego model comes with The Child’s favorite toy: a gearshift knob from The Mandalorian’s spacecraft. It can be fitted into The Child’s hand. The set also comes with an information sign and a Lego minifigure of Grogu to complete the display. Some customers did find the cloak to be their least favorite part of the assembly because it was repetitive. Overall, most reviewers were delighted with the toy set.

With more than 80 reviews on the Walmart website, the Lego Star Wars: The Mandalorian The Child Collectible Buildable Toy Model is rated as 4.8 out of 5.

Be sure to check out Space.com’s Space deals, or our guide to the best Lego space deals.