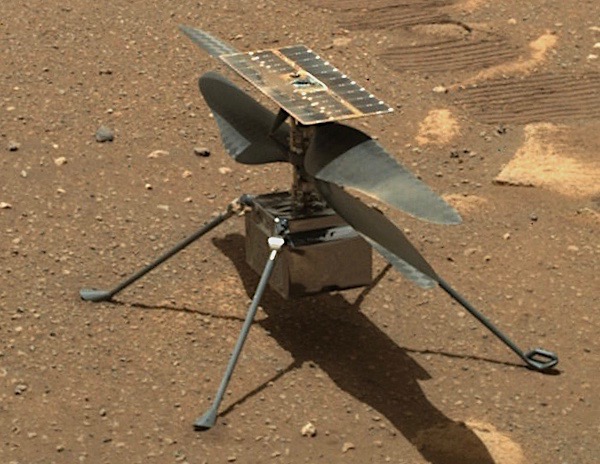 NASA’s Mars helicopter Ingenuity was supposed to be a museum piece by now.

The little chopper landed with NASA’s Perseverance rover on the floor of Jezero Crater one year ago today (Feb. 18), tasked with showing that aerial exploration is possible on Mars despite the planet’s thin atmosphere.

Ingenuity did just that over the course of five pioneering flights last spring, becoming the first rotorcraft ever to ply the skies of a world beyond Earth. And then it kept on flying, racking up a total of 19 Red Planet sorties — and counting.

“There isn’t a single item that we’re getting nervous about,” he added. “Everything is holding up very, very well.”

The 4-pound (1.8 kilograms) Ingenuity flew to Mars on Perseverance’s belly and deployed from the life-hunting, sample-caching rover six weeks after touchdown, on April 3, 2021. The helicopter then embarked on a month-long campaign that took powered flight beyond Earth.

Ingenuity aced that technology-demonstrating mission, etching its name in the aviation history books alongside legends like Wilbur and Orville Wright. And that performance isn’t the only link between Ingenuity and the Wright brothers; the helicopter toted to Mars a tiny swatch of fabric from Flyer 1, the plane that made the first powered flights on Earth in December 1903.

Ingenuity’s $85 million mission was supposed to be done after flight number five. But the solar-powered chopper had performed so well and remained so healthy that NASA granted a mission extension.

Ingenuity has been pushing the limits of Red Planet flight during this new phase. For example, on sortie number 11, which it made on Aug. 4, the helicopter covered 1,257 feet (383 meters) of ground, got 39 feet (12 m) above the red dirt and reached a maximum speed of about 11 mph (19 kph). Ingenuity hadn’t reached those marks on any of its first five flights.

The rotorcraft is also doing scouting work for Perseverance on these longer, more ambitious jaunts, helping the rover team plan routes and scope out potential science targets. For example, Perseverance’s handlers decided not to send the six-wheeled robot into an area dubbed “Raised Ridges” largely because of Ingenuity’s reconnaissance.

“That’s not to say the team didn’t have great debates about there still being real science value,” Kevin Hand of JPL, the co-leader of Perseverance’s first science campaign, told Space.com. “But at least with Ingenuity, we were able to get a closer look and see that there was not anything tremendously different from what we’ve observed elsewhere.”

Hand marveled at Ingenuity’s longevity, calling it “the little engine that could.”

“I remember when we passed the initial expected lifetime, and we were like, ‘OK, maybe it’ll still be going in the fall,'” he said. “We got to fall and it’s still going — ‘OK, maybe it’ll still be going into winter.’ And here we are looking at spring of 2022 and Ingenuity is still pioneering incredible vistas that have helped guide us with the path forward for Perseverance.”

It hasn’t been perfectly smooth sailing for Ingenuity. For example, the helicopter failed to transition to flight mode as planned in the leadup to its first-ever sortie, pushing that historic liftoff back by about a week.

Ingenuity’s first attempt at flight number 14 was aborted after the chopper detected anomalies in two of its six flight-control servo motors. And a big Mars dust storm delayed flight 19 more than a month.

Such issues are to be expected on a planetary exploration mission, especially one that’s pioneering new technologies and new capabilities. Ingenuity has powered through all of them to date, suggesting that the future is very bright for aerial exploration on Mars.

And that future may not be as far off as you think.

“We’ve already kicked off early efforts to look into how Ingenuity, or Ingenuity-like platforms, scale to do things like carry science payloads, how they might be autonomous, completely self-sustaining spacecraft that are not attached to something like a rover to cover greater distances and access a variety of science targets,” Karras said. “So, that’s what we hope: Looking back five or 10 years from today, we’ll see that this was the stepping stone, the precursor to bigger, bolder aerial exploration on Mars.”