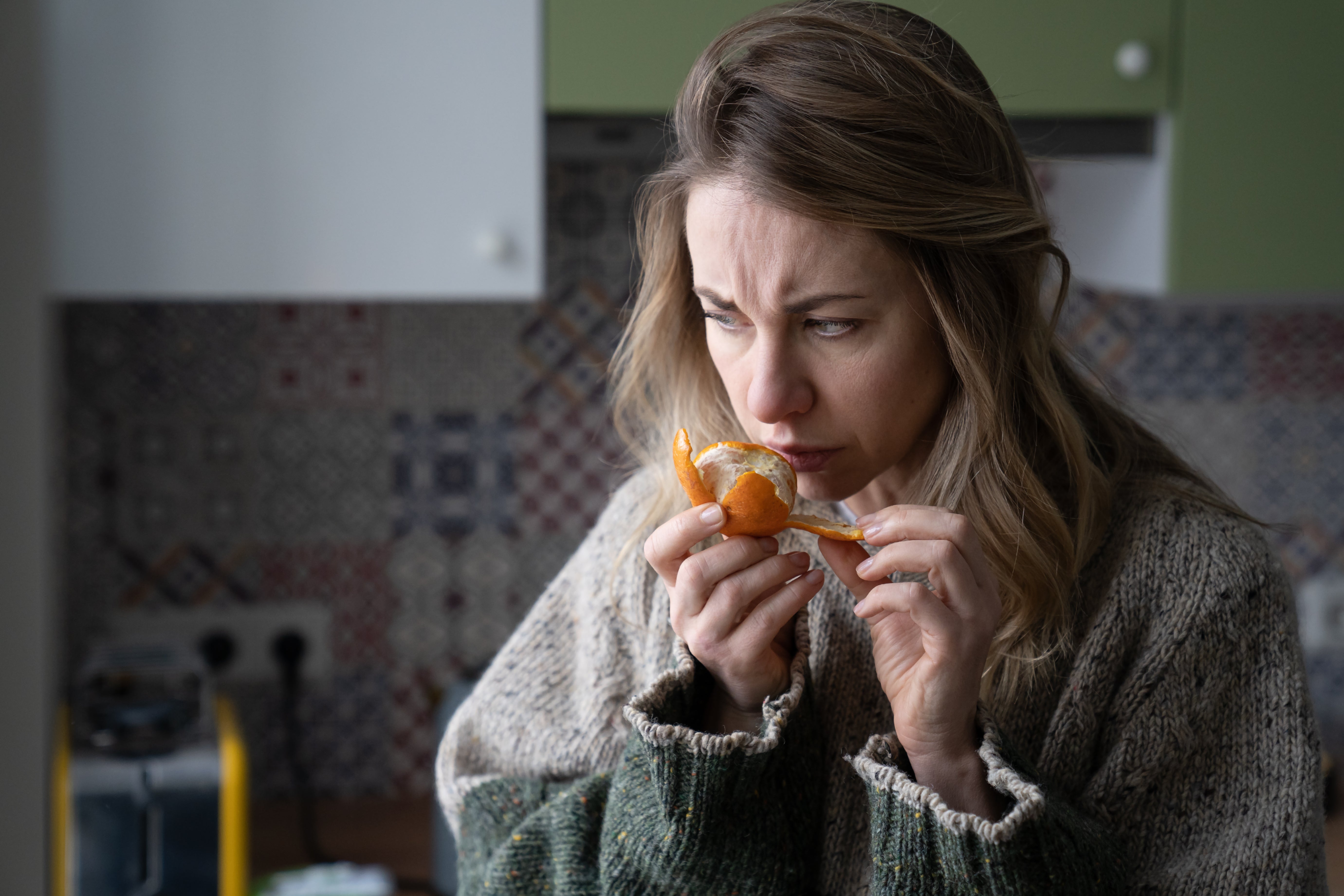 An impaired sense of smell affects from about 30 to 75 percent of people infected with the novel coronavirus, according to a recent estimate, suggesting that millions of people worldwide have suffered this condition at some point in the past two years. Called anosmia, the olfactory system dysfunction is typically temporary, but it can take months or longer for a full recovery, making it difficult to enjoy meals and to detect odors such as spoiled food, smoke and others that can signal danger.

Now a February 1 study in Cell proposes a detailed biological explanation for COVID-related loss of the sense of smell: The research involved feeding Cocoa Krispies cereal to virus-infected hamsters and then confirming genetic results in human tissue. The team concludes that infection with the coronavirus, or SARS-CoV-2, causes severe inflammation in structural cells in the olfactory system, thereby overwhelming and impairing the function of nerve cells and other smell-related processes deep in the nasal cavity.

A similar cascade of olfactory effects might explain the biological mechanisms behind long COVID, the researchers suggest in a second study that was posted online as a preprint on January 20. To learn more about these related insights into anosmia and long COVID, Scientific American spoke with virologist Benjamin tenOever, director of the NYU Langone Virology Institute and a faculty member at New York University’s Grossman School of Medicine. TenOever is part of the team that conducted the anosmia-focused study and is senior author of the long COVID study.

How did you test anosmia and other olfactory effects of SARS-CoV-2 infection?

There has yet to be any biology witnessed in manifestations of COVID-19 in humans that we cannot replicate in hamsters. So we studied three groups of hamsters—a group infected with SARS-CoV-2, a group that received a control substance as a mock infection and an influenza-infected group to provide a benchmark showing the typical immune response to a common respiratory virus. Then we did behavioral tests with the groups, including one that involved withholding food for about 10 hours so the hamsters were good and hungry. And then we took Cocoa Krispies—which the hamsters love—buried the cereal under their bedding and then timed how long it took them to grab it and stuff their face with it.

Among the hamsters infected with the mock or the flu viruses, they all found the Cocoa Krispies within seconds on days zero through day 14 after infection. But the SARS-CoV-2 animals on day one and on day two didn’t find the Cocoa Krispies at all. They just left them. So it was very clear that they lost their sense of smell because, by day 15, they were all back on track, and everybody was very happy and focused on finding and eating the Cocoa Krispies. We then repeated that experiment, but this time we used single-cell sequencing, which lets you see not only all the cells that make up the olfactory system but also where the virus is going and the consequences of that infection in all of those cells.

What did the team learn about the details of the mechanism that underlies anosmia?

What the data show is that the virus is limited to this one type of cell called SUS, or sustentacular—cells in the olfactory tissue in the nasal cavity. This cell type performs an important structural role and ensures that related cells, called olfactory sensory neurons, in that tissue are organized in such a way that you can perceive smells. Following SARS-CoV-2 infection, we find that hamsters have lost more than half of all of their SUS cells in a two-day period. So the structure of the olfactory system has just been totally decayed away because of that significant cell death. And as a result, those SUS cells are now spewing out a great deal of material that triggers inflammation.

What happens next to cause the loss of sense of smell?

The adjacent olfactory sensory neurons, which detect odors, typically spend 80 percent of their transcriptional [gene copying] bandwidth dealing with olfactory-related biology such as processing smells and making different smell-related receptors. Now, suddenly, they are bombarded with all of this other inflammatory information that’s demanding, let’s say, 50 percent of their transcriptional bandwidth. As a result, the neurons are forced to avert their attention from olfaction, resulting in a dramatic loss of production for the components needed for smell, culminating in anosmia.

The cells are still there, and the cells aren’t dying. They are just busy doing something else. And as a result, you will lose your sense of smell, because so much bandwidth has been taken away, and your olfactory machinery can no longer comprehend such a complex process. And so, for a brief period of time, about three to five days after infection with SARS-CoV-2, many people lose their sense of smell. But by then, the janitorial cells have cleaned up a lot of that inflammatory material, and progenitor cells replenish the population of SUS cells. And most people get their sense of smell back.

How does this anosmia research relate to the proposed cause of long COVID in your second new study?

This study goes one step further to say, “Yes, all of this olfactory system inflammation can persist for a long period of time. And the longer it stays there, the longer you respond to it.” There are many reasons why the inflammation might last a little bit longer in certain individuals. But what we find is that the inflammatory response in the olfactory system can travel into the brain.

We sequenced all of the organs from SARS-CoV-2-infected hamsters during the first week of infection, when the virus is actively replicating, as well as weeks and months thereafter. In addition to different organs, we also performed this same type of analysis on individual brain compartments, including the prefrontal cortex, striatum, thalamus, cerebellum, trigeminal ganglion and the olfactory bulbs. These analyses demonstrated that the entire body shows signatures of inflammation for weeks following viral clearance.

While this inflammatory response does diminish over time in the body’s organs, these transcriptional changes persist much longer in the olfactory bulbs, striatum, thalamus and cerebellum. What’s more, those transcriptional signatures show loss of a number of metabolic activities as they maintain this heightened inflammatory state. The changes in metabolism scarily look a lot like some of the signatures that come out of, say, Alzheimer’s, Parkinson’s, ALS [amyotrophic lateral sclerosis] and other neurodegenerative diseases. And in hamsters, we can correlate the ones that have that activity as also doing very poorly on behavioral tests. So the fact that they were behaving differently would suggest that they’re also having some kind of cognitive change or behavioral change as a result of this prolonged inflammation that has penetrated many aspects of their neurological circuitry.

What are the implications of these findings for the treatment of long COVID?

By the time a patient with COVID is in the hospital, the problem usually is no longer replicating virus. It’s actually all of that inflammatory material that is still there causing your body to overreact to it. And so we treat with steroids to set everything back down to baseline. This would suggest that the same thing should work in the brain for people with long COVID, but this needs to first be tested in animals to understand dosage, timing and steroid choice.

If researchers found that the coronavirus did infect neurons and that long COVID was actually the by-product of a low-grade infection somewhere in the brain, the last thing you would want to do is give those people steroids. That would actually lower the innate immune defenses in your brain and allow the virus to build up a bigger armament and start replicating anew in the brain, which obviously you don’t want. If you give somebody who has SARS-CoV-2 steroids before they have cleared the virus, it’s very bad news.

But if we give steroids that cross the blood-brain barrier to hamsters, and they actually shut this inflammation down, it would suggest that this would also work in human beings. Obviously, we need to do more testing before studying this in people. We already have a colony of hamsters with long COVID, and we will soon begin testing steroids and antidepressants to determine possible therapeutic approaches.