Following the time of the dinosaurs, it might well be that the evolution of flowering plants drove the explosion in the diversity of life on Earth, according to a 2021 paper.

Most of the plants we now eat, drink, wear, and build with are of the flowering variety. They’re called angiosperms, which roughly translates from Greek as ‘seed vessels’.

“More than a million species of modern insects owe their livelihoods to angiosperms, as pollinators such as bees and wasps, as leaf-eaters such as beetles, locusts, and bugs, or feeding on nectar such as butterflies,” says Pennsylvania State University paleobotanist Peter Wilf.

“And these insects are eaten by spiders, lizards, birds, and mammals.”

Hundreds of millions of years ago, it’s been suggested that most species on Earth lived in the oceans – which makes sense given these watery places cover over 70 percent of our planet’s surface. But today, most of life’s diversity is found on land.

In a recently published literature review, University of Bristol paleobiologist Michael Benton and colleagues argue this changeover, which is thought to have occurred around 100 million years ago, was driven by flowering plants. It coincided with several innovations in angiosperm biology.

This was around the time when many of the plant families we know today arose according to molecular timelines, which included a massive increase in fruit and seed size – a driver for the evolution of more fruit-eating animals. 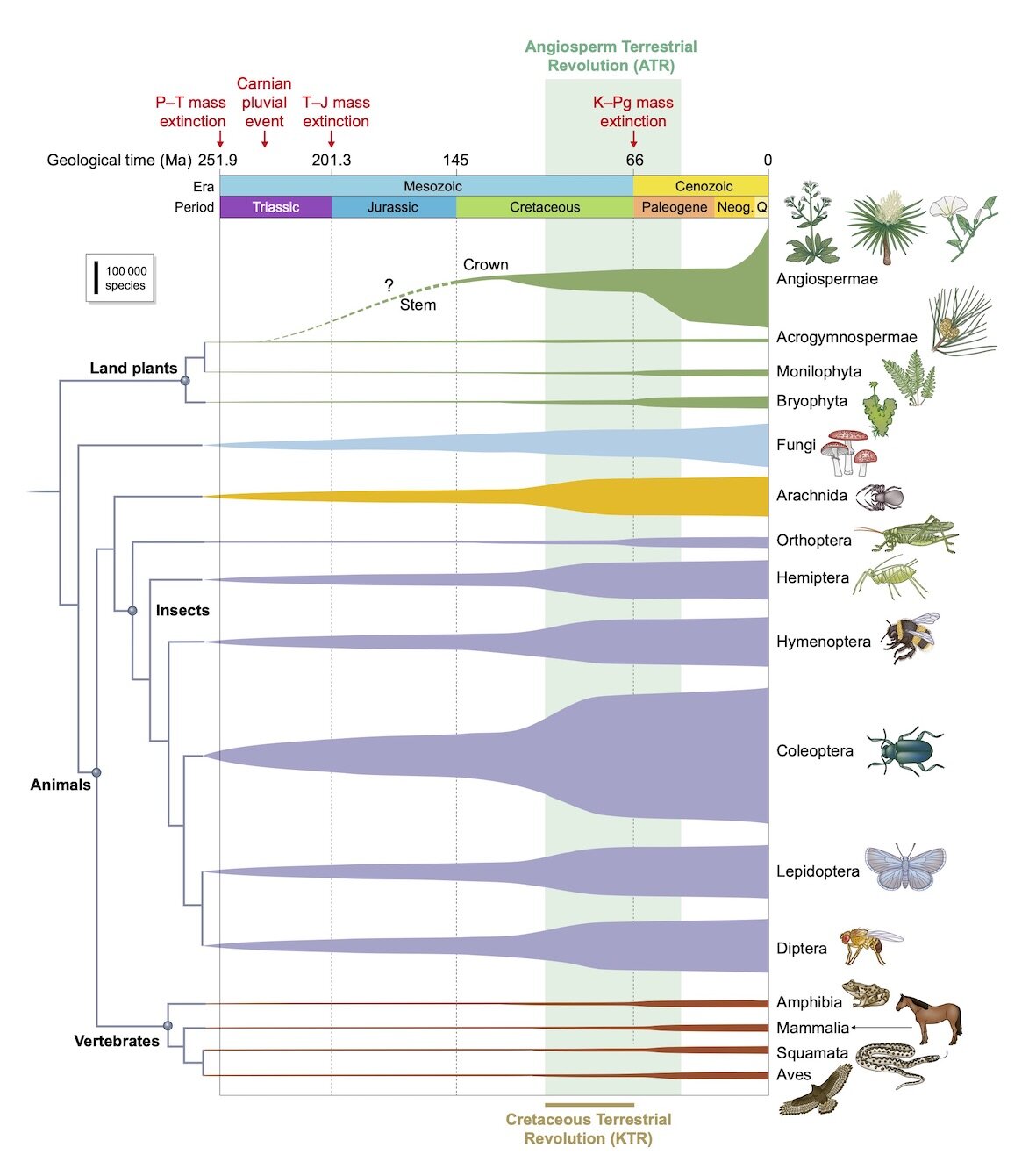 Above: The rise of angiosperms coincided with massive expansions in the biodiversity of modern plants, fungi, and animals.

“Flowering plants might have been around for some time, but they began to appear more commonly in the Cretaceous, in the last 70 million years of the age of dinosaurs,” says Benton.

“But it seems that dinosaurs didn’t choose to eat them, and continued chomping ferns and conifers such as pines. However, it was only after the dinosaurs had gone that angiosperms really took off on evolutionary terms.”

The team has called this event the Angiosperm Terrestrial Revolution, and suspects we’ve overlooked it previously because it was punctured by the dramatic extinction event that knocked non-avian dinosaurs out of the picture.

That asteroid impact destroyed many types of creatures, including 70 percent of marine species; but when life rebounded, it was the insects, birds, mammals, and reptiles on land who won out.

“It is even possible that the removal of the dinosaurs and their constant trampling and disturbance was the trigger for these events,” says paleobotanist Peter Wilf from Pennsylvania State University.

These floral evolutionary experiments seem to have driven life on land to diversify in four main ways, the team suggests.

Firstly, as flowering plants spread into different habitats, evolution twisted them into a dazzling array of new forms. These new varieties of structures, chemicals, and reproductive strategies created new opportunities for the other life evolving around them.

“The angiosperms became hugely diverse themselves, but they also created enormous numbers of niches for other plants and animals, so you get tens more species on each hectare of Earth’s surface than you would if angiosperms had not become established when they did,” says Benton.

In turn, the increase in productivity means these plants were producing and trading more energy.

“They can also capture much more of the Sun’s energy than conifers and their relatives, and this extra energy passes through the whole ecosystem,” says evolutionary biologist Hervé Sauquet from Sydney’s Royal Botanic Gardens. The resulting new food sources, from luscious vegetation to enticing high-energy treats for pollinators, created many mutualistic relationships between these plants and animals, triggering a cascade of other new opportunities for biodiversity through to the very top predators.

“Angiosperms also drive the evolution of the animals that pollinate them, mainly insects, and they can build complex forest structures which are homes to thousands of species,” explains Sauquet.

Finally, as the flowering invaders increased in abundance, they also started influencing their local climate. Higher rates of transpiration mean the plants draw more water from the soil and pass it into the atmosphere, altering the climate and water cycles.

This allowed angiosperms to increase the extent of wet tropic environments and therefore expand the suitable habitats of many other species, from frogs to fungi and even for the other plants that preceded them like ferns. It was a win-win situation.

“On the other hand, conifer forests, based around the pine family, for example, contain fewer species of other plants or animals, and they probably were never as species-rich,” notes Sauquet.

Benton and colleagues suggest differences in genetics enabled angiosperms to diversify so much more than other plants. Despite past genome duplications (a trait common in all plants that can result in more chromosomes), they have relatively small genomes with fewer chromosomes. The mechanisms that reduce their genomes may be what lets flowering plants create new genotypes so easily.

This may have allowed flowering plants to usher in a whole new regime of life on Earth. Ultimately, it became our regime.

The review was published in New Phytologist.