In the 1970s, low-carb diets were all the rage. The Dr Atkin’s Diet Revolution book claimed carbohydrate restriction was a “high calorie way to stay thin forever“.

These days, low-carb diets are promoted as a weight-loss solution, to beat heart disease and as better for diabetes. But how do these claims match up with the latest research?

A new review of the evidence found long-term low-carb dieters lost just under a kilo (roughly 2 pounds) more weight than other dieters. However the review concluded there was no evidence low-carb diets have any additional health benefits.

In fact, if you’re on a low-carb diet, you’ll need to pay closer attention to what you eat to make sure you get enough essential vitamins, minerals, dietary fiber and other phytonutrients.

What did the reviewers investigate?

The Cochrane review included 61 randomized controlled trials (the highest level of evidence) with almost 7,000 adults with excess body weight. About 1,800 had type 2 diabetes. People in the healthy weight range were not included.

The reviewers compared weight-loss diets that varied in carbohydrate content: 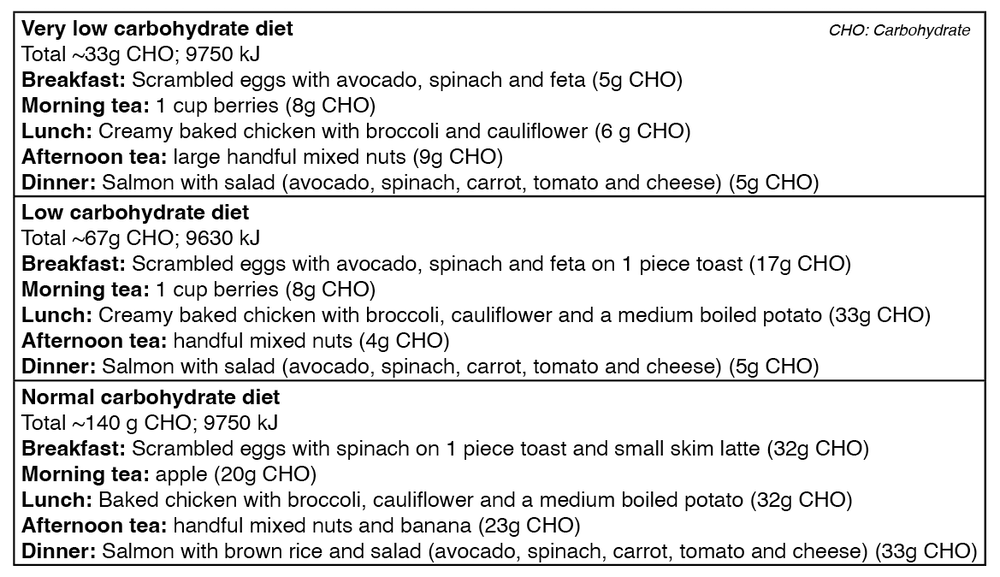 Above: Here’s an example comparing how a very low-carb, low-carb and balanced carb one-day meal plan might look. The portion sizes differ between the meals to keep the total kilojoules about the same. Note, the reviewers grouped the first two low carb diet categories together.

What did they find?

The reviewers found that among adults with excess body weight (but who didn’t have type 2 diabetes), those following lower-carb diets for 3 to 8.5 months lost, on average, one kilogram more weight than those on balanced carb diets.

However, when they ensured restrictions in energy intake were the same in both groups, by providing the food or meal plans, the difference was about half a kilogram.

In longer-term weight-loss interventions lasting one to two years, the average difference in weight-loss between those on low-carb versus balanced carb diets was just under one kilogram.

The average weight lost by groups on any weight-reducing diet varied greatly across the trials from less than one kilogram in some, up to about 13 kg (28 lbs) in others.

The studies in adults with type 2 diabetes found greater initial weight loss on low-carb diets compared to balanced carb diets: 1.3 kg over three to six months. However, in longer interventions that lasted between one to two years, there was no difference.

In the small group of studies that included a maintenance period at the end of the weight-loss intervention, there were no differences in weight-loss in adults either with or without type 2 diabetes.

There were no significant differences in other health measures, including blood pressure, cholesterol, blood sugar control or risk of constipation. And they found no important clinical differences in results based on the extent of participants’ carb restriction.

Overall, the review shows that whether you prefer a lower carb or a balanced carb eating pattern, both can work for weight loss.

Nutrients to monitor on a low-carb diet

Carbohydrate is a macronutrient. Your body uses it to produce energy to fuel your muscles, brain, lungs and other vital processes.

Healthy foods with carbs – breads, cereals and other grains, fruit, vegetables and milk – are packed with other important nutrients, especially dietary fiber, thiamine, calcium and folate.

Without careful planning, a low-carb diet could also be lower in these nutrients. So how can you ensure you’re consuming enough? Here’s what to look out for – and some lower- and higher-carb options.

Dietary fiber is needed to keep your bowel function regular and promote growth of healthy bacteria in your colon.

Thiamin or vitamin B1 is needed to supply energy to your body’s tissues and is used to metabolize carbohydrates.

Calcium is needed for strong bones.

Folate is essential for growth and is used to manufacture DNA, your genetic code. Adequate intakes are especially important for women, as folate is needed to prevent neural tube defects in infants during pregnancy.

Ultimately, if you love carbs and want to lose weight, you can. Plan to lower your kilojoule and carb intake by not eating ultra-processed, energy-dense, nutrient-poor (junk) foods, while still eating carbohydrates from healthy foods.